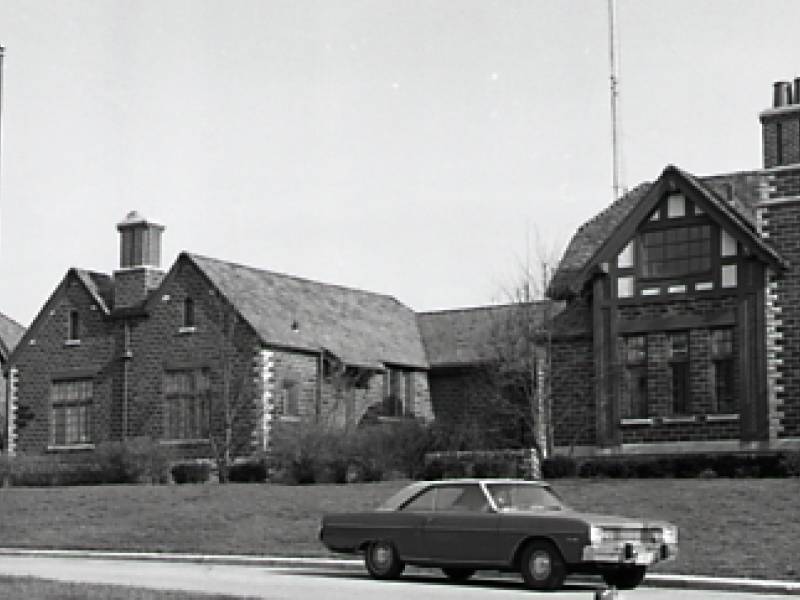 “I love this building, and I love its historical background,” Mayor Mark Kownick said. “It’s a very cool structure, but it’s just falling apart. … You come here in the rain, and there are buckets everywhere.”

News accounts at the time estimated that the building was about 40,000 square feet, including a great room that has since been closed to the public because of leaks in the slate roof and other structural problems. Kownick said beams are coming apart and roof joists are unsound. They are among a laundry list of structural repairs the village needs to identify and devise a plan to repair.

“We’re not even close to deciding what we want to do with the building,” Village Administrator Jacob Rife said. “There are rumors out here that the village is going to demolish the building. We’re just exploring options. …There are no plans to demolish this building and build homes here.”

Rife said the public hearing about the Village Hall space at 6 p.m. Thursday is more of a housekeeping matter. Cary wants to eliminate its business park zoning – the underlying designation of the municipal campus. It is proposing to rezone the property R-1 residential to be more in keeping with the area.
Rife noted that the current business park zoning district allows a structure up to 50 feet high – something nobody wants.

“We’re folding the zoning, sign and development ordinances into one unified development ordinance,” Rife said. “The bigger picture here is that the police department is cramped for space. We’re starting the process here to solicit a proposal for architecture firms to help with a space needs analysis. In phase 2, we want to look at the existing building to see if there are ways to renovate the interior in order to stay here.”

The village’s long-range plan, adopted in 2015, identifies a new police station as a top priority – built in a more central location downtown. Kownick reiterated that and hinted that the “synergy” between municipal and police functions most likely will mean if one leaves, the other will follow. But that does not mean the historic Hertz building, valued by Cary and Trout Valley residents, could not be repurposed as a community or senior center.

The August Kraus Senior Center, named for former Mayor Conrad Kraus, currently is housed in the old Village Hall at 441 Main St. Built in 1888, Cary Public School expanded, with a second floor added in 1896. It served the community until 1949. Curtiss later bought the former schoolhouse.

Before that, Village Hall was at 4 Crystal St. At one time, that building also housed the fire department and library.

“Everything is on the table right now,” said Rife, who anticipates the fact-finding process to get underway early next fiscal year in May. “There isn’t anything nefarious going on. … If folks have questions, I’m happy to meet with people.”
• • •
The Illinois Heritage Association recently reported an unexpected boon for film buffs.

Several dozen full-length feature films from 1923, the publication year that most recently became public domain in the U.S., are available free for viewing or to download by clicking on www.archive.org/details/moviesandfilms.

Use the search bar and filters on the left to explore the entire internet archive’s movie collections.
• • •
The McHenry County Historical Society and Museum will host its seventh annual Antique Appraisal Day from 1 to 4 p.m. Feb. 23 at the museum, 6422 Main St., Union.

Registration continues through Feb. 19. The cost is $7 for each object, with a maximum of three appraisals a person. Reserve a 10-minute slot for your treasure by calling the museum at 815-923-2267.

Walk-in appraisals will cost $9 an object and will be taken on a first-come, first-served basis – pending time and scheduling constraints. For details, visit www.gothistory.org.