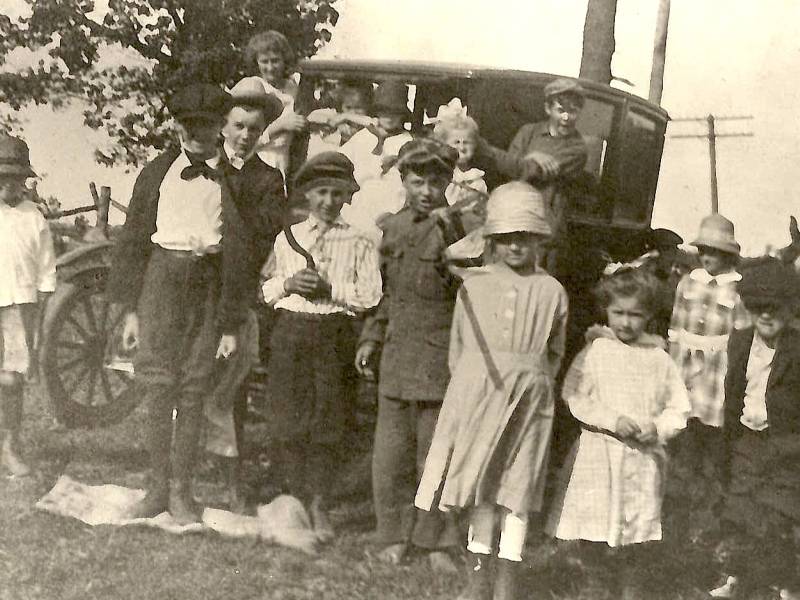 Students from Cold Spring School appear in about 1922. The school, built in 1870, almost disappeared forever. In 1927, the Lake Development Co. intended to buy 3,000 acres and flood the entire valley. It was estimated the lake would have been 25 feet deep and – similar to the man-made Wonder Lake – would have covered every structure in its path, but the Great Depression intervened.

Bull Valley has every right to celebrate its 40th birthday this year. It is, after all, a very long time.

I know. I graduated from Crystal Lake Community High School in 1977. Ouch.

Village President Emily Berendt noted that the village’s “semi-rural character, low-density development and low-impact land uses” are a big part of its charm. Folks enjoy the many private nature preserves, oak savannas, unique watersheds and large lots. In 1955, the owners of 3,000 acres (half of Bull Valley at the time) agreed to place their land into 3-acre estate zoning – the highest residential classification offered by the county at the time.

“Our model is the reverse of other municipalities, with our core being the larger lot open spaces that we carefully preserve, and smaller lot development more appropriate along our edges,” Berendt said. “Commercial development along Route 120 has been contemplated in our comprehensive land use plan since 1992, when that road was the northern edge of the village. Commercial development that compliments the village character would still be appropriate there.”

A neighborhood Countryside Improvement Association formed in 1942, and in 1977, reorganized as the Bull Valley Association, which launched and campaigned for incorporation. It passed by a vote of 89-69, and Charles Liebman became the first village president.

Between 2000 and 2010, the village’s population jumped from 726 to 1,077 people. Berendt believes it has remained pretty steady during the past few years, but the village’s footprint continues to grow – from 2.3 square miles originally, to 8.6 square miles today. And thanks to the dedication of Judy Lovaas and Ken and Darlene Fiske, both the Holcombville and Cold Springs one-room schoolhouses remain part of the landscape.

The latter, built in 1870, darn near disappeared forever. In 1927, the Lake Development Co. intended to buy 3,000 acres and flood the entire valley. It was estimated the lake would have been 25 feet deep and – similar to the man-made Wonder Lake – would have covered every structure in its path.

That, it seems, is how it goes with preservation. More often than not, public involvement or pure luck turns the tide.

Nicole Horn, president of the nonprofit Stickney House Foundation, has spent a good chunk of her life bringing the 1856 historic house – which doubles as a village hall – back from the brink.

Received by the village as part of a 700-acre annexation, the 10-room house at 1904 Cherry Valley Road is known for its distinctive rounded corners – a vestige of Sylvia (Beckley) Stickney’s interest in spiritualism. The Stickney House and 2 acres were deeded to the village in 1986, and it was placed on the National Register of Historic Places in 1987. The Stickney House Foundation was established in 1991.

Horn said the foundation has spent “well into the hundreds of thousands” to repair and restore the structure. It includes all 15 windows with their arched tops. This winter volunteers plan to remove an interior wall added to divide the upstairs ballroom.

“It’s the ongoing maintenance with any house, as well as a major renovation job from year to year,” Horn said. “Fortunately, there are quite a few contractors in the area that volunteered their services and donated supplies.”

An upcoming foundation fundraiser is the third annual Oktoberfest, from 12:30 to 2 p.m. Oct. 8, at the Stickney House. The event, which celebrates the village’s 40th anniversary, will feature a mounted color guard, live music, food, drinks and games. Guests also will get an opportunity to meet the wild mustang, Padre. Admission is $5 for those age 12 and older. For details, visit www.bullvalleyoktoberfest.com.

The next public tour of the Stickney House is scheduled from noon to 4 p.m. Dec. 3.

“I think the biggest mission for the village of Bull Valley has been the preservation of land and native species,” Horn said. “It’s always easy to come in and tear something down, but it’s a lot more difficult to preserve it. … We have something special, so let’s be sensitive to it.”

Theories on how the area got its name range from a farmer named “Bull” to marginal soils used to graze bulls to the presence of bulrushes in the area of Cold Spring Road and the Bull Valley Hunt Club.

But one thing not in dispute is the village’s all too rare willingness to let the natural rhythm of land dictate its future use.

“We need to stay true to our roots and stay the course,” Berendt said. “Outreach and inclusion in the larger community is important to our stability. Balancing that with the need to remain true to our core values will help keep this little oasis safe.”

• Historic Halloween: Return of the Dead – 7 to 9 p.m. Oct. 11 at the McHenry County Historical Society Museum. For this dark night only, several of McHenry County’s tragically departed return to describe the details of their demise. Doors open at 6:30 p.m. Halloween refreshments will be available in the society’s West Harmony one-room school afterward. Admission is $5 for members and $10 for nonmembers.

• Wine and Craft Beer Tasting fundraiser to benefit Hatchery Park – 2 to 5 p.m. Oct. 7 at 2314 Hatchery Road, Spring Grove. The event features 24 wines and 10 beers, including five offerings from Crystal Lake Brewing. Advanced tickets are $30 and are available online at www.forwinelovers.com. Tickets are $35 at the door.

• Dearly Departed: Deadly Spirits – 6 to 8 p.m. (15-minute intervals) Oct. 13 and 14 at Colonel Palmer House, 660 E. Terra Cotta Road, Crystal Lake. It is 1926, and undesirable elements from Chicago have moved into the area and are peddling vile “hooch.” Advance tickets are $10, and reservations are required. Visit www.cl-hs.org for information.