A Bear, A Star and the Great Depression: A Christmas Story

Home » A Bear, A Star and the Great Depression: A Christmas Story 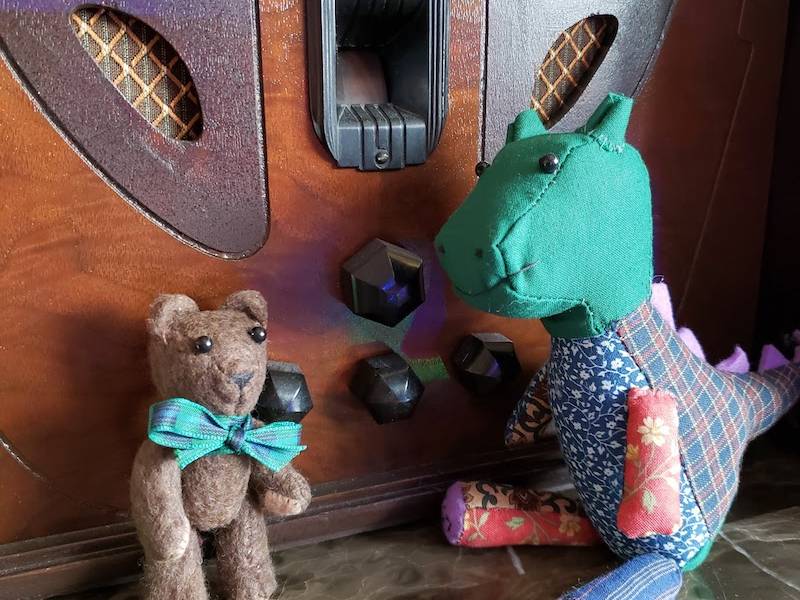 A Bear, A Star and the Great Depression: A Christmas Story

Christmas just wouldn’t be Christmas without the stories told year after year.

Christmas celebrates the birth of Jesus Christ, but that story is just one of many that make up the festive season. Santa Claus is another huge star of the season, whether he’s facing off against the cynical in Miracle on 34th Street or dodging the Burgermeister in Santa Claus is Coming to Town. Other North Pole celebrities get time in the limelight too, such as Rudolph the Red-Nosed Reindeer. Movies such as Home Alone, A Christmas Story, and Elf are more modern additions to the Christmas must-watch list. We’d regret excluding even the great grumps of Christmas, Charles Dickens’ Ebeneezer Scrooge and Doctor Seuss’ Grinch.

And then there’s The Cinnamon Bear, a children’s radio program that first aired in 1937. My Christmas certainly wouldn’t be Christmas without this little bear’s adventures.

I bet most of you haven’t heard of The Cinnamon Bear, so let me introduce you. The Cinnamon Bear is named Paddy O’Cinnamon, and he’s a little stuffed bear, only four inches high, with shoe-button eyes and a green ribbon worn around his neck. He enjoys singing his theme song as an introduction to new characters in the show. Though he speaks with an Irish accent, he tells listeners that he’s only “slightly Irish.”

As the story goes, twins Judy and Jimmy Barton meet Paddy O’Cinnamon in the attic of their home while looking for the silver star that sits at the tip-top of their Christmas tree. They soon discover that the Crazy Quilt Dragon, another attic resident, has stolen the silver star, and so the twins team up with Paddy to follow the Crazy Quilt Dragon into Maybe Land – a fantasy world just beyond a hole in their attic wall. Adventures ensue as the trio becomes a quartet, (The Crazy Quilt Dragon becomes a “frenemy.”) traveling across Maybe Land and meeting all sorts of fantastical individuals.

I won’t spoil the ending for you, readers, but I will share that eventually the group enlists the help of Queen Melissa of Maybe Land and Santa Claus to get their silver star back.

The epic journey unfolds in 26 episodes, each between 10-15 minutes long, in the days between Thanksgiving and Christmas. It was produced by Transco (The Transcription Company of America), a Hollywood radio syndicator, and written by husband-wife duo Glan and Elisabeth Heisch. Department stores across the United States sponsored the program, most notably Wieboldt’s in Chicago and Lipman, Wolfe & Co. (Later Frederick & Nelson) in Portland.

The Cinnamon Bear aired sporadically in Chicago throughout the 1940s, but moved to TV in 1951. The televised version was essentially a puppet show filmed in sync with the radio recording. To this day radio stations rebroadcast episodes every year, and there’s even a Cinnamon Bear cruise in Portland.

Since I wasn’t around in the 1930s, I have my dad and a local radio station to thank for allowing me to grow up with this story. At precisely 1 p.m. every Saturday of my life, my dad has turned on the radio to listen to “Those Were the Days” on WDCB, a radio program that plays radio shows and music from approximately the 1930s through the 1950s. My dad tends to listen while he does chores around the house, so I essentially grew up surrounded by these radio shows whether I liked it or not. (Readers, if you’ve ever wondered how I got to be so interested in history, this is partly to blame.)

Most of the shows aired on the program were not directed at children, but every year between Thanksgiving and Christmas I finally got to hear a children’s show: The Cinnamon Bear. The story utterly enchanted me. Over the years my dad bought the cassette tape set, which came with a book, and later I received the CD set. I still listen to The Cinnamon Bear every year. Just a couple of years ago I sewed a Cinnamon Bear and a Crazy Quilt Dragon for our family Christmas tree. (Someone needs to look out for our star’s well-being!!)

As I get older, I find that I listen to the story in different ways. I understand more about the historical context of The Cinnamon Bear and how this children’s radio show fits into the world in which it was created. These episodes were originally broadcast during the Great Depression and the Dust Bowl, and World War II began only a few years after its debut. The children (and adults) listening to these episodes grew up in an especially challenging, uncertain world. Like so much entertainment during this time period, The Cinnamon Bear is wonderful, whimsical escapism. For 10-15 minutes a night, children escaped into a magical world.

Among the cast of characters is a group of singing cowboys, the Cocklebur Cowboys, who round up glow worms instead of cattle. Including these characters tapped into an already existing trend for Westerns in the entertainment industry. For instance, Gene Autry, Roy Rogers, and John Wayne all began their “singing cowboy” roles during the 1930s. Judy and Jimmy also meet pirates (bent on capturing candy, not gold), a wicked witch (whose cackle I still find bone-chilling), a beautiful queen, and plenty of talking animals.

Many of the programs and acts from President Franklin Roosevelt’s New Deal had been passed and were already operating by the time The Cinnamon Bear first aired in 1937. One of those acts was the National Labor Relations Act of 1935 (also known as the Wagner Act), which established the National Labor Relations Board. This act is important because it protected collective bargaining and guaranteed the right of employees to unionize. Apparently there are also unions in Maybe Land. A group of creatures called Inkaboos, who are all made of paper, are subjects of King Blotto III, but some of his staff have unionized. The Royal Executioner belongs to Executioner’s Union Local 33 1/3.

When King Blotto orders that Judy, Jimmy, and Paddy be executed, the execution is initially delayed because the Royal Executioner is on his day off. Although King Blotto demands that he be called in anyway, another staff member (who later remembers that he’s the Assistant Royal Executioner) comments that such a demand would not sit well with the Executioner’s Union. That, of course, only makes the king even more irritated. In light of the labor legislation enacted in the U.S. only a couple of years earlier, the timing suggests that this scene isn’t just poking fun at bureaucracy, but also at the newly increased power of labor unions.

The Cinnamon Bear is a product of its time in matters of race and gender, as well. Quite frankly, not all of the characters portrayed in the show would be acceptable to modern audiences for its reliance on stereotypes. The character of Paddy O’Cinnamon rests heavily on some Irish stereotypes, specifically the “fighting Irish” aspect. The group also meets a wooden cigar store Indian, Chief Cook-and-Bottlewasher, who could have come straight out of a Western movie. Just like in a Western movie, this cigar store Indian is a mysterious and strange “bad guy” who can’t be trusted (in contrast to the “good guy” cowboys). However, this character also tells the group that he went to college and played football, and he uses English slang occasionally. These details suggest that he has assimilated to white American culture to some extent, which complicates the stereotypical image of a Native American entirely separate from white American culture.

Even with these complicating characteristics, this character is still not a positive representation of a Native American. (EDIT: This complicated Native American stereotype might be drawing from the real-life Native American (Sac and Fox Nation) athlete Jim Thorpe, who was well-known by the 1930s. He played college and professional football, as well as professional baseball and basketball, and took home gold medals in track and field at the 1912 Summer Olympics in Stockholm.)

In terms of gender roles, Judy and Jimmy behave in ways expected for girls and boys of the time. Jimmy is the assertive twin and defends the team from the various threatening creatures they encounter. Judy, on the other hand, is more sensitive. She often cries and other characters comfort her when the going gets especially tough. All of these representations are frustrating, but they provide important insight into how 1930s Americans saw themselves, their neighbors and their society.

Given some of the stereotypical characters in the program, I was surprised to find some representation of minority groups in the casting of main characters. Barbara Jean Wong, a Chinese-American actress, voiced Judy Barton. Buddy Duncan, a vaudeville star with dwarfism, voiced Paddy O’Cinnamon. Experts and fans haven’t been able to figure out the identity of Jimmy Barton’s voice actor, but Walter Tetley, a radio and screen actor, is the strongest possibility. Other known cast members were big names in the mid-20th century entertainment industry, but 21st century readers might more easily recognize them from classic Disney movies. Joseph Kearns (Doorknob in Alice and Wonderland) played the Crazy Quilt Dragon, Verna Felton (Cinderella’s Fairy Godmother) played Judy and Jimmy’s mother, and Elvia Allman (Clarabelle Cow) played Penelope the Pelican.

For better or worse, The Cinnamon Bear cannot be separated from its historical context, but this radio program can still charm the festive socks off my feet. At 82 years old, this program has survived more than a few major transitions in communication, from radio broadcast to television shows to recordings on the Internet. I suspect that it has remained in public memory this long because it is both enchanting and it’s intertwined with so many people’s personal memories. In fact, this column will join very few written works out there on The Cinnamon Bear, and nearly all of them (including this one) discuss the author’s personal connection to the show.

All of those people who are invested in and who share this story with others are part of the reason why Paddy O’Cinnamon and his friends continue to make their journey through Maybe Land year after year. As long as there are eager listeners, I don’t see this Christmas tradition changing any time soon.

•••
You can join in on the search for the silver star by listening to the adventures of The Cinnamon Bear on the Internet Archives and on YouTube.