And the walls came a tumblin’ down

Home » And the walls came a tumblin’ down 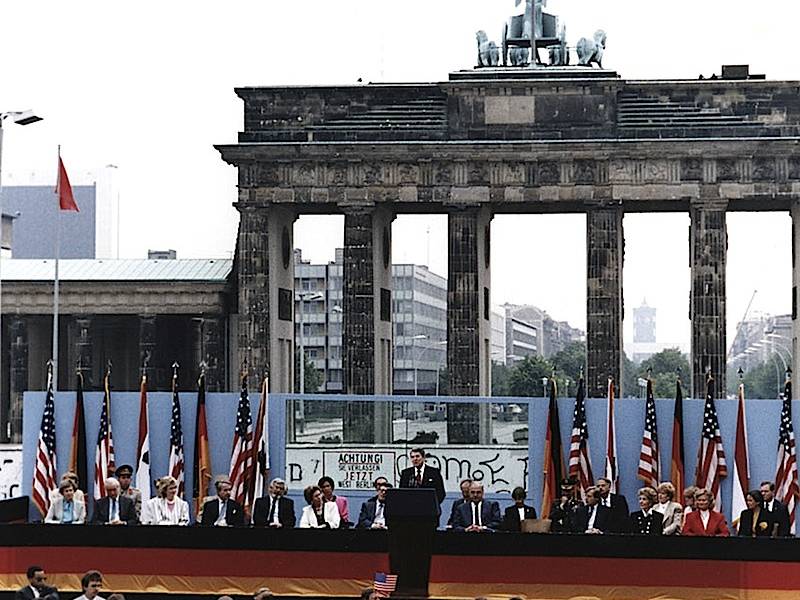 And the walls came a tumblin’ down

Every wall needs a gate

"Behind me stands a wall that encircles the free sectors of this city, part of a vast system of barriers that divides the entire continent of Europe. . . . Standing before the Brandenburg Gate, every man is a German, separated from his fellow men. Every man is a Berliner, forced to look upon a scar. . . . As long as this gate is closed, as long as this scar of a wall is permitted to stand, it is not the German question alone that remains open, but the question of freedom for all mankind. . . .
General Secretary Gorbachev, if you seek peace, if you seek prosperity for the Soviet Union and Eastern Europe, if you seek liberalization, come here to this gate.
Mr. Gorbachev, open this gate!
Mr. Gorbachev, tear down this wall!"
– President Ronald Reagan included the following remarks before the Brandenburg Gate on June 12, 1987.

Photo courtesy of the National Archives

You can’t go anywhere nowadays without hearing about a wall.

President Donald Trump is demanding $5.6 billion to build a wall along the U.S. border with Mexico. The Democrats, led by newly elected House Speaker Nancy Pelosi, say “no” – which is the same in Spanish and English, by the way.

The Associated Press reported that the two sides have traded offers, with no solution in sight to the partial government shutdown that began Dec. 22.

Since then, Trump has rejected his own administration’s offer to accept $2.5 billion for the wall, and Democrats have backed off from their offer of $1.6 billion for border security measures.

A Democratic package to end the shutdown, adopted Thursday by the House, temporarily funds the Department of Homeland Security at current levels – with $1.3 billion for border security – through Feb. 8. Leaders of the Republican-controlled Senate have proclaimed the bill dead on arrival.

Those momentary feelings of peace and goodwill to men apparently are over.

Putting aside politics, what can history tell us about the effectiveness of such walls? Would a wall spanning the 1,954-mile border with Mexico even work?

Here is a synopsis of some of the more famous walls in history and how they fared.

• The Maginot Line – Named after French Minister of War André Maginot, the Maginot Line was a series of concrete fortifications, obstacles and weapons installations built by France in the 1930s to deter an invasion from Germany.

Instead of attacking directly, the Germans simply bypassed the fortifications to the north through the Netherlands and Belgium.

Advancing rapidly through the Ardennes forest and across the River Meuse, the Nazis encircled Allied forces and forced a heroic evacuation at Dunkirk.

• Great Wall of China – At about 13,170 miles long, the Great Wall spans 15 Chinese provinces and remains a major tourist attraction.

Started in 771 B.C. and then added to over the centuries, it was designed to deter raids from nomadic horsemen called the Huns.

However, it did not fare as well against standing armies.

In 1644, the Manchu Qing marched through the gates of Shanhai Pass, replacing the Ming Dynasty as rulers of China.

Historians believe it took three legions of infantry about six years to complete the stone wall, which was designed to protect the Roman province of Britannia from “barbarians” living in what now is Scotland.

After repeated raids by Anglo-Saxons, Irish and Picts (Scots) in the north, and with the need for troops to defend the homeland, Rome abandoned Britain about A.D. 410.

• Walls of Babylon – King Nebuchadnezzar II (634-562 B.C.) built three walls around Babylon along the Euphrates River in what was ancient Mesopotamia and now is Iraq.

The walls were said to be 40 feet high and broad enough to ride chariots along the top.

The Ancient History Encyclopedia notes: “The Greek historian Herodotus claimed that ‘Babylon surpasses in wonder any city in the known world’ and specifically praised the walls that he said were 56 miles long, 80 feet thick and 320 feet high.

Although it is generally believed that Herodotus exaggerated the majesty of Babylon, other ancient writers have also noted the magnificence of the walls.”

Nevertheless, the Neo-Babylonian Empire fell in 539 B.C. to Persians, less than a century after its founding.

The Ishtar Gate, considered one of the ancient world’s wonders, was excavated between 1899 and 1917 by a German archaeological team.

After World War I, part of the gateway was reconstructed for public viewing at the Pergamon Museum in Berlin.

• Berlin Wall – Constructed in 1961 at the height of the Cold War, the East Germans sought to prevent their dissatisfied countrymen from escaping to the west.

At about 12 feet high and 27 miles long, it was bolstered by landmines, guard towers, barbed wire and a no-man’s land between two walls.

Nevertheless, an estimated 5,000 people managed to breach the defenses between 1961 and 1989. The resourceful escapees employed everything from balloons to tanks and tightropes to tunnels in their quest for freedom.

The wall began being dismantled in 1989 with the breakup of the Soviet Union.

Illinois lost 45,000 people in 2018. That marks the fifth straight year the state has lost people, according to the latest data from the U.S. Census Bureau.

“From July 2017 to July 2018, more than 114,000 Illinoisans left the state, a total population decline of more than 45,000 people,” the Illinois News Network reported. “The data show Illinois had the second-largest decline of any state in the nation and Illinois’ largest in decades. Only West Virginia lost as high of a percentage of population, and only New York lost more people.”

According to the Illinois Policy Institute, Illinois loses a resident every 4.6 minutes to other states, coupled with a dwindling birth rate.

“Illinois’ population loss over the last five years is equivalent to losing the entire city of Joliet, Naperville or Rockford (the third-, fourth- and fifth-largest cities in the state, respectively),” the Illinois Policy Institute wrote. “If this continues, Illinois is projected to lose one or two of its 18 seats in the U.S. House of Representatives following the 2020 Census.”

Even worse than this loss of representation is the fact that those exiting Illinois tend to be educated and of prime working age. Factors blamed for the outgoing population migration range from high taxes (made higher by fewer taxpayers) and concerns about the state’s business climate to Chicago’s murder rate and the state budget deficit (at $14.6 billion and climbing). The last time Illinois had a balanced budget – i.e., enough money to cover all of its bills – was in fiscal 2001.

James Gregory, a history professor at the University of Washington, spearheaded “America’s Great Migrations Project” three years ago as part of the Civil Rights and Labor History Consortium at the Seattle university. A migration expert with 30 years of experience and several books to his credit, Gregory believes the move is the latest chapter in a larger story.

“In general, there has been an outgoing exodus from older population centers in the Northeast and Great Lakes states in the Midwest. Illinois has been sending its sons and daughters to other states, particularly the West, for generations,” Gregory said. “Now the birth rate has slowed, and the out-rate has surpassed those numbers.”

The Migrations Project, which chronicles migration history between 1850 and 2010, suggests that population redistribution is a cyclical thing. For example, between 1930 and 1940, Illinois’ population grew by 162,587 – a jump of a little more than 2 percent.

“Illinois, like other Midwestern states, experienced rapid population growth through migration in the 19th century and much slower growth since then. Recording a population of 851,000 in 1850, the state doubled its numbers by 1860, doubled again by 1880 and again before 1910. It has taken a century to double the 1910 total (5,638,591).

“Migration in the 19th century drew heavily on states to the east of Illinois, especially New York, Ohio and Pennsylvania. European immigrants from Germany and Ireland came in huge numbers in the same period. The 1880 Census showed that about half the population was from out of state, with Germany, New York, Ohio and Ireland the leading contributors.”