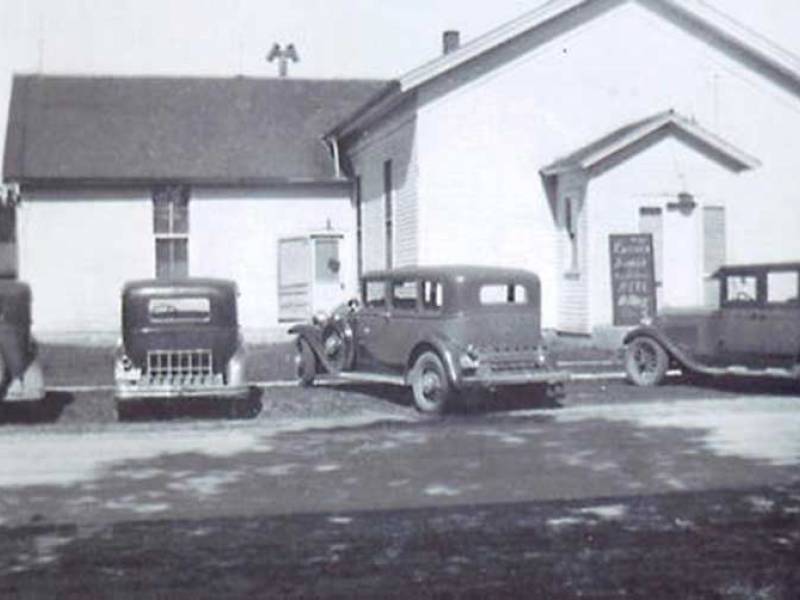 NOVEMBER 2013 - Unincorporated Alden, at the junction of Route 173 and Alden Road, may seem like little more than a wide spot on the road.

But those who think that are missing out on a lot of important county history.

The area, supplied by good water from the northern branch of the Nippersink Creek and plenty of timber along its banks, was settled in 1836. It was a superb place for pioneer farmers from New York to settle.

An old Indian trail stretching west from what would be Kenosha, Wis., (originally “Southport”) to Rockford – Route 173, formerly referred to as the Chemung and Southport Road – allowe d for relatively easy access to Lake Michigan transportation. By 1861, the Kenosha, Rockfor d and Rock Island Railroad (later the Chicago & North Western Railroad) laid its rails through the Alden settlement and built a small station that still stands.

The coming of the railroad was the impetus for the construction of a school, a grain elevator, a stock yard and a church – all proud symbols of a prosperous, growing community.

In the same year the railroad came to Alden, Methodists who once worshipped in the ho me of early settler Asahel Disbrow believed the growing village needed a place to be used specifically as a house of worship.

“They’d start up United Methodist churches in homes and in class meetings and then gr ow and grow. After 30 years of meeting in homes, they raised enough money to have their own place, ” the Rev. Diana Otterbacher said.

Otterbacher was the longest tenured pastor at the Alden Methodist Church, serving the re five years as a seminary student then called back four years later. Otterbacher ministered there for 11 years until 2011 before moving to Hampshire’s Zion United Methodist Church. Most of the clergy have come in gone in one or two years.

“Alden was very good rolling with the punches,” Otterbacher said. “It got started back in the day of the circuit riders. ... Circuit riders would come around once a month to administer the sacraments, do weddings and baptisms, and make sure everything was in good order. But the beauty of the Methodist movement was its focus on lay leaders and lay leadership.

” So when yet another rookie preacher arrived after a year or two, it was no big deal. The congregation pitched in, showed the new kid the ropes and moved forward.

“A lot of congregations wouldn’t want that. But I think that is why we held together,” said Bobette Von Bergen, a member of the church for more than 60 years. “We were family. I was married in that church. Our kids were baptized in the church.”

Construction started in 1861 along the north side of the Southport Road, a few lots w est of the old north-south Indian trail and what would become a military road to Lake Geneva (now Alden Road). Just as the building’s frame was complete, high winds brought the framework crashing to the ground.

After a railroad excursion to the campsite of the newly constituted 95th Illinois Infantry (composed mainly of men from McHenry and Boone counties) and an 1862 tent revival, enough money was raised to allow for a reconstruction of the church’s frame and the completion by January 1863.

On Jan. 14, 1863, numerous horses and buggies filled the frozen road outside while almost 100 people were greeted inside the new church by the church’s Ladies Aid and Missionary Society (established as early as October 1860). The dedication of the church was a joyous occasion for all who were there.

Two wood-burning stoves at the back of the building near the pulpit labored to keep the revelers warm.

By 1880, the Big Foot Methodist Episcopal group had joined the Alden group, bringing the church’s membership to 193. In 1882, a Sunday school for children was established, where more than 75 children learned it was a bad idea to drink alcohol, dance or gamble.

In 1913-14, a large room was added to the west side of the church to be used as a dining hall. Later, kitchen equipment was added in the basement of the church along with an oil furnace. Since 1951, numerous small improvements have been made to the building.

Von Bergen acknowledged the congregation is aging. “There is not enough young people in our church to make it grow,” she said.

Forty-one-year member Margo Van Dan estimated of the 80 congregants, no more than 30 are active. But they get by on sheer determination, she said.

“There is just barely enough of us to keep paying for it,” Van Dan said.

Walking into the building brings one back into a time when a majority of Americans lived in small villages and trusted deeply in God and the future. Sitting in one of the pews, one gets a sense village life in late 19th century America was generally a pleasant and tranquil time when a rosy future awaited. The building’s survival engenders that feeling.

The church’s congregation will celebrate the building’s sesquicentennial (150 years) Saturday. The building will be open for inspection from 9 a.m. to 4 p.m. All McHenry County residents are invited to stop in, feel the energy the historic old building emanates and add their own presence to the history of the building.

Many of the church’s former pastors will be there as well. They will share memories, laughs and a little fellowship over fried chicken from Crandall’s Restaurant in Hebron. And it’s all free to the public.