Adopt a book, turn a page in history

Home » Adopt a book, turn a page in history 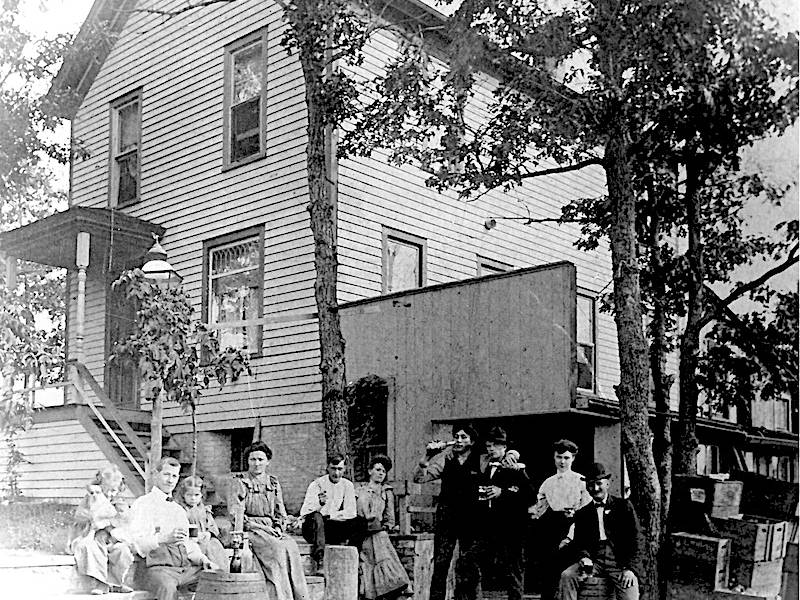 Adopt a book, turn a page in history

The Buffalo House tavern is long gone, but its memory lives on in a 6-by-15-inch business ledger. The ledger dates from the early 1900s and kept track of patron’s drink bills.

The “Buffalo House” in Lily Lake was opened Michael L. Worts as a combination tavern and hotel in 1901. The decision to build a tavern hotel on the east shore of Lily Lake was a wise one since the main wagon route between Chicago and Lake Geneva, Wis. followed today’s Darrell Road and Route 120 west through McHenry. On top of that, Lily Lake was a destination for fishermen in the 1890s.

In 1897 Michael Worts married Katherine Boley, a daughter of Gottlieb and Josephine Boley. Gottlieb Boley owned the McHenry Brewery which produced a beer called “Buffalo.” Having married into the Boley family, Michael made a point of selling only “Buffalo Beer” at his new roadhouse; the reason why the establishment was called the “Buffalo House.”

In the pre-computer age, meticulous (or in this case less than meticulous) records were kept in ledgers. The Buffalo House logged everything from patrons’ liquor and tobacco purchases to supplies such as pork, apples and “cornstocks.” There are even handwritten accounts of hours worked.

The McHenry County Historical Society is launching a conservation initiative that encourages the public to “adopt” a historic McHenry County book held within its collection. For example, $600 is needed to mend torn pages and reattach the front and back covers to the Buffalo House ledger. Treatment includes mending, surface cleaning, hinging on loose page, rebacking the original boards with Japanese tissue, stabilizing the cracks in the board with Japanese tissue, and reattaching the case to the text block.

By donating to the Adopt A Book program, you are directly supporting these conservation efforts. On this page you will find books selected for “adoption.” Donors – either individually, as an organization or in concert with others – will receive:

•    An “Adopt A Book” certificate.
•    Information packet on your selected book.
•    Before-and-after images once the conservation is complete.
•    Formal acknowledgment of your tax-deductible contribution.
•    Acknowledgment in our next Tracer newsletter as a member of our Adopt A Book Program.
•    Donor appreciation event with tour of the MCHS Research Library to view your adopted book.
•    Free 1 hour scheduled research time in the MCHS Research Library.

Because of their age and demand in research, the survey notebooks require professional conservation. Once adopted and stabilized, each survey notebook will be made available in the research library for public use. For program details, click HERE.

In 1906, John took over operations of the Buffalo House from his brother, Michael.  John and his wife, Lena, operated the tavern until 1911 – when it was sold to a younger brother, Matt.

According to a family history, Matt suffered a heart attack while visiting St. Anne’s Hospital for a checkup. At age 99, it seemed a sensible precaution before riding in a parade commemorating the city of McHenry’s founding in 1836.

“Some say that perhaps because he could not have his daily cigarettes and schnapps during the examinations, it was too much of a shock to his system,” nephew Robert Worts wrote in a 1988 family history.

In the late 1920s, Otto Broecker purchased the Buffalo House and renamed the tavern the “Lily Lake Hotel.” It was a popular spot for Chicago fishermen and hunters to stay. After passing through the hands of various owners, Floyd and Mary Lee purchased the property and made extensive changes in the building, which later became the Lakeside Inn. The building was torn down in the late 1990s.