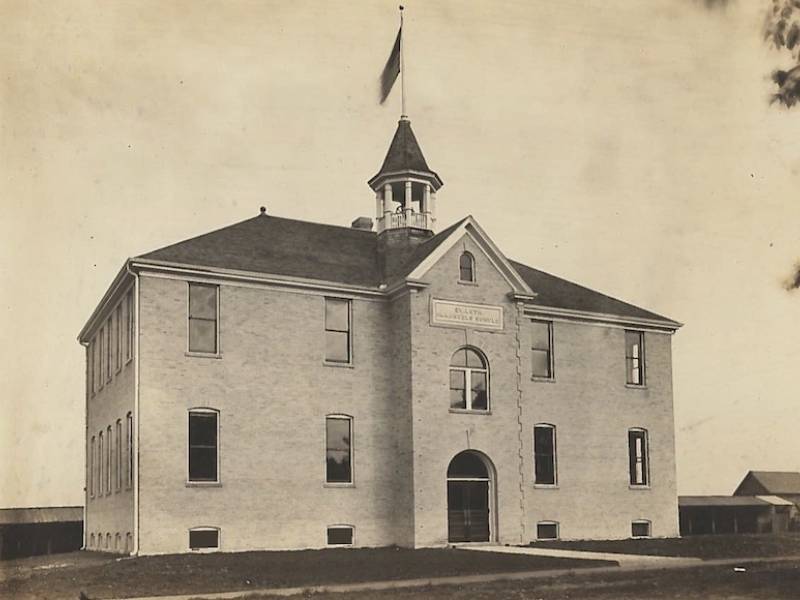 An ordinance allowing rezoning and redevelopment of the former Immanuel Lutheran Church property for use as apartments was continued until the next Crystal Lake City Council meeting at 7:30 p.m. Jan. 7.

Following a denial by the city’s Planning and Zoning Commission on Dec. 9, developer True North Properties Inc. must secure a super majority of the City Council (five of seven votes) to move forward. Holiday absences prompted its decision to wait.

Developers are proposing 36 units with 28 in the main school building, and the additional eight in three other buildings located on the 2.46 acres. This density would require modified zoning to allow 13.8 units an acre, compared with nine units. The developer argued unsuccessfully before planning and zoning commissioners that this higher number of units was necessity in order to recoup the cost of expected amenities.

It seems likely the redevelopment of this 9,100-square-foot historic church, located at 174 McHenry Ave., will require some common sense compromising. Requests by planning and zoning to remove signs and dead bushes, fix parking spaces, provide bicycle racks and manage trash are reasonable. As for the church’s exterior, the company already stated it intends to leave that alone.
Assuming the results of a preliminary traffic study – which found a net reduction in overall trips (except for Saturdays) compared to when it was a church and high school – prove accurate, it would appear that a solution is within reach. So why not grasp it?

No one wishes to see this 1895 church building or the adjacent 38,000-square-foot school, built in 1906, destroyed by time and neglect. There is too much history here, located along a pivotal street in a historic residential section of Crystal Lake. Blending the past and present demands a creative and realistic mindset.

The former Woodstock Die Cast property, located just north of the Square near the depot, serves notice that redeveloping vacant land – even in a prime location – is far from a sure thing.

The 1943 George W. Borg Corp. building in nearby Delavan, has been added to the Wisconsin Register of Historic Places.

According to the Delavan Historical Society, the Chicagoan Borg also made automobile clocks and helped develop the automobile clutch. But it was his work during World War II that received the most attention. The company, important for innovative mechanical devices and textiles, produced mechanical time fuses for anti-aircraft shells.

In 1940, Thomas B. Gibbs started a factory in town that manufactured timing and electrical devices. During World War II, Borg and Gibbs completed more than 30 contracts for the U.S. government. Little wonder Delavan was considered a priority for sabotage.

The building also reflected changes in the nation’s workforce during the war, employing significant numbers of women.

Following the war, the newly created Borg Fabric Division occupied the building and its success led to the construction of a three-story addition in 1956. A majority of Borg’s deep-pile fabric production was intended for the apparel industry; specifically, imitation fur used in garments and coats. The George W. Borg Corporation is credited as a pioneer in the field of pile fabrics and received numerous patents throughout the 1950s and ‘60s when the industry rapidly grew. Shifting market conditions resulted in the end of pile fabrics manufacturing at this location in 1980.

The property is worth mentioning because it is yet another example of what planners call “adaptive reuse.” Last summer the city of Delavan received a $250,000 grant from the Wisconsin Economic Development Corp. to help finance the redevelopment of the historic building into a new mixed-use Brass Works Apartments.

The exterior of the estimated 100,000-square-foot building will not change much, outside of restoring the brick and installing new, period-accurate windows. The interior, however, is being gutted to create 73 loft-style apartments plus 1,000 square feet of commercial space on the street level.
The $16.3 million project, being developed by General Capital Group of Fox Point, Wisconsin, is being supported by a $1.2 million in tax-increment financing funds from the city and an allocation of affordable housing tax credits. The developer also is taking advantage of federal and state historic preservation tax credits.

It just goes to show you. If there is a will to embrace a community’s history and use it as a foundation for re-imagining the future, there is a way. My hope is we find a way in McHenry County.

The National Oceanic and Atmospheric Administration’s latest Arctic Report, admittedly, is highbrow stuff. It is loaded full of charts and stats, percentages and scientific terms that can make the most educated laymen do a double take.

For details, visit https://arctic.noaa.gov/Report-Card/Report-Card-2019.
Still, the conclusions are clear as a crisp winter’s day: Global warming is not theoretical. It’s real. And we either control the circumstances that are causing it, or they eventually will control us.

Some of the report’s major findings include:

• The average annual land surface air temperature in the Arctic between October 2018 and August 2019 was the second warmest since 1900.
• North American Arctic snow cover in May 2019 was the fifth lowest for that month in 53 years.
•The Greenland Ice Sheet is losing nearly 267 billion metric tons of ice a year.
• Loss of sea ice and changes in bottom water temperature caused fish species to shift to more northern waters. Commercially valuable southern species are expanding their range north to take advantage of changing conditions.
• Arctic sea ice at the end of summer was the second lowest since satellite observations began in 1979.
• On land, the warming surface air temperature is causing a decrease in the extent of the Arctic snow cover, an increase in the overall amount of Arctic vegetation, and the thawing of perennially-frozen ground, known as permafrost. An estimated 300 to 600 million tons of microbial carbon stored in that permafrost may be released in the atmosphere as carbon dioxide and methane – greenhouse gases that accelerate global warming.

In the wake of another green Christmas, it is worth noting that November 2019 was the second-hottest November in 140 years of record keeping. The average global land and ocean surface temperature last month was 1.66 degrees F above the 20th-century average and the second-highest November temperature on record – just shy of November 2015.

In fact, the world’s five hottest Novembers have all occurred since 2013.
Ironically, November also was when the Trump administration formally notified the United Nations that the U.S. would withdraw from the 2015 Paris climate agreement.

Frosty is just about to melt away … outside and inside the museum.
Veteran Christmas memorabilia collectors Dave Harms and Lynne Eltrevoog have compiled a lineup of some 20 different automated props designed to lure window shoppers inside stores. Other vintage holiday decorations, many with a Frosty theme, join these mechanized pieces at the McHenry County Historical Museum, 6422 Main St. in Union. Entries in the fourth annual “Rock Around the Quilted Tree” also are on display.

The exhibit is open to the public from 1 to 4 p.m. Thursday and Friday or by special appointment. For information, call 815 923-2267 or visit GotHistory.org.

• Kurt Begalka is administrator of the McHenry County Historical Society & Museum. He may be reached atkurt@mchenrycountyhistory.org.