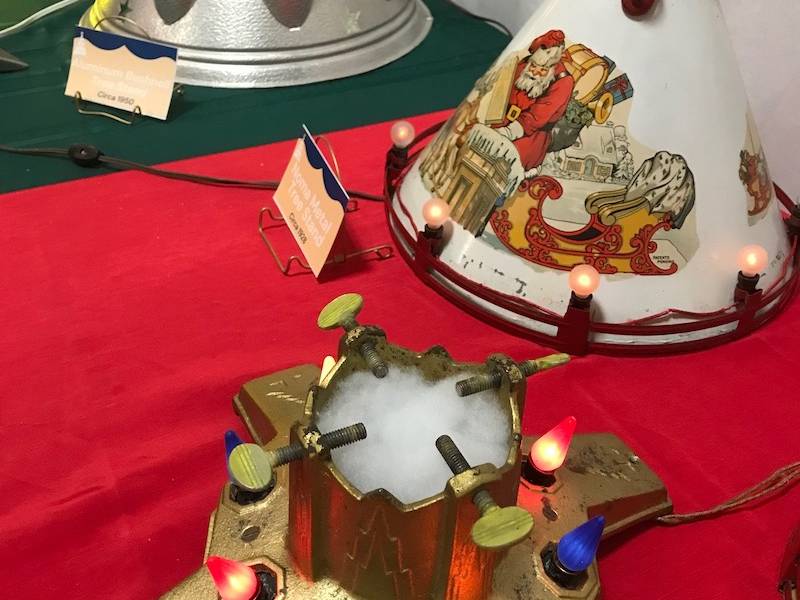 UNION – After a two-year hiatus,  a one-of-kind, vintage Christmas display returns to the McHenry County Historical Museum at 6422 Main St. in Union through Jan. 6.

Edward Hibberd Johnson, a business associate of inventor Thomas Edison, created the first known electrically illuminated Christmas tree at his home in New York City in 1882. He hand-wired 80 red, white and blue light bulbs and wound them around his Christmas tree. Johnson also invented the rotating tree stand that became particularly popular with aluminum trees. A selection of tree stands from the 1920 through the 1960s will be on display, as will timeline of various Christmas lights used from 1903 until the early 1970s.

View light sets from the early 1900s through the 1950s, and learn about their various forms of construction. They include a variety of bubble lights; hand-painted, illuminated glass figures, glass “Wonder Stars” produced in Czechoslovakia and sold by Chicago-based Matchless Electric Co., and glass lights manufactured briefly in the early 1920s from Dresden, Germany. They were sold by the Noma Electric Corp. of New York – once the largest Christmas lighting manufacturer in the world.

The vintage display also includes:
• A 125- year-old German church nativity made by master sculptor, Konrad Rabbels of Kevlaer, Germany. There are 27 figures with the largest being 40 inches tall. The crèche spans 15 feet.
• Three mechanical elves that appeared in the opening, department store scene of the movie “A Christmas Story.”
• Examples of early goose feather trees including an early electrified version, offered to homeowners in Ohio if they converted to electricity in their homes in the 1920s.
• Rare glass ornaments, include those meant to mimic fruits and nuts not readily available before refrigeration and the expansion of freight rail service.
• A wax-covered linen tree carpet from the early 1900s, designed to catch drips from the candles commonly used to light Christmas trees.

Also on display are small aluminum trees from the 1960s, including a 6-foot pink variety, and Polk Brothers’ Jolly Polk Santa and Snowman.

Museum hours are 1 to 4 p.m. Tuesday through Friday, through Jan. 6 – with the exception of Dec. 23 and 30. Free admission, but donations are appreciated.