We all put on our pantaloons one leg at a time 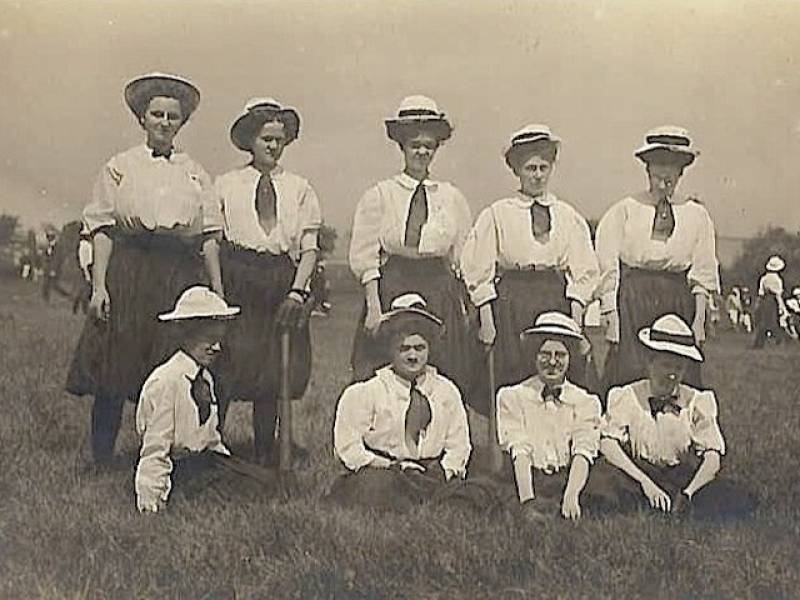 We all put on our pantaloons one leg at a time

The April 24, 1913, edition of the Woodstock Sentinel proudly touted the community’s “base ball” team, noting that team captain, Randall, was putting his players through their paces.

“Should a little bird happen to whisper in your ear that the Woodstock Baseball club would not be among the top-notchers this season, kindly inform the said bird that the report is all a mistake,” the paper wrote.

Although I’m not sure if the season lived up to expectations, I do know that baseball was a nationwide passion at the time. There were factory teams, such as those sponsored by the Oliver Typewriter Co. in Woodstock, as well as industrial leagues, church and community teams, and barnstorming exhibitions.

The latter not only pitted local boys against professional teams, such as the White Sox and Cubs, but it pitted men against women.

The Parisian Bloomer Girls played McHenry on July 4, 1903, at Gages Park, and all of the female players listed their first names as “Mile.”

The paper proclaimed: “The above lineup is liable to change without notice. It is reported that a few of the bloomer girls are even now troubled with cold feet.”

The aforementioned 1913 paper proclaimed the Boston Bloomer Girls would be in town the upcoming Sunday. A Sports Illustrated article stated the “Bostonians once played 28 games in 26 days without a loss.”

Now that, as kranks (fans) once shouted, “is a real corker!”

Bloomer squads were named after their attire – functional, loose-fitting pantaloons created by suffragette Amelia Jenks Bloomer. Hundreds of teams – from places such a New York and Chicago – provided women an opportunity to travel and play this traditionally all-male sport during the late 19th and early 20th centuries.

A 1906 edition of the McHenry Plaindealer noted that the Bloomer Girls were “too slow for our boys” – even though the girls made a game of it. The McHenry Blues prevailed, 8-5.

The game story noted, “The fans are now satisfied to know that there is one thing in the world that women cannot do, and that is to play ball. … As far as the game itself is concerned, it was dull and featureless, with one exception – that being the work of Miss Baker at first base. Her catch of a foul fly into the crowd being a fine piece of work.”

A 1916 game in Harvard, played with “gasoline torches illuminating the field,” was another close contest. Harvard defeated the visiting Bloomer Girls, 14-11.

A game preview in the Aug. 30, 1906, the Plaindealer predicted the Chicago Bloomer Girls would give the home team a very competitive match – and at the bargain price of 25 cents, or only 10 cents for women and children.

“They play a good game of ball and will give the lads plenty to do to win out. They have in their lineup some of the best lady athletes in the world, and it will be well worth the price of admission to see them play the national game,” the paper wrote.

By the 1920s, men had returned from war and these bloomer leagues began to die out.

However, their legacy lives on. Author Anne Aronson noted that “by the 1940s, the transition from baseball to softball was complete, and the newer sport became wildly popular among both women and men across the U.S. and Canada.”

Aronson, in The National Pastime journal noted: “In 1943, Philip K. Wrigley, fearing that the manpower shortage caused by World War II would harm major league baseball and his own fortunes as owner of the Chicago Cubs and Wrigley Field, capitalized on the abundance of female softball talent by establishing the All-American Girls Professional Baseball League. In this early phase of the league, the game was a hybrid of softball and baseball. It featured underhand pitching, for example, but it also allowed leading off and stealing bases, forbidden in regulation softball. League managers felt that base stealing would make the game more attractive to fans.

“The AAGPBL, made famous in the movie “A League of Their Own” (partially filmed at the Illinois Railway Museum in Union), began with four teams located in midsize Midwestern cities: Kenosha, Wisconsin; Racine, Wisconsin; Rockford; and South Bend, Indiana.

In 1944, Wrigley added two more teams to the league, this time in the much larger cities of Minneapolis and Milwaukee. The Minneapolis Millerettes played their first home game at Nicollet Park on May 27, 1944, against the Rockford Peaches.”

The Peaches played until 1954.

Rockford marked the 75th anniversary of the Peaches this year with a series of events culminating in a June 3 baseball game at Beyer Stadium.

This and other fundraisers eventually hope to raise the $7 million needed for a proposed International Women’s Baseball Center, constructed across the street from Beyer Stadium on 15th Avenue in Rockford. Reportedly, more than $15,000 has been raised so far.

For information about the center or upcoming events – such as Women in Baseball Week from July 22 to 28 – visit www.internationalwomensbaseballcenter.org.

Admission is free to the historical re-enactment titled “Should We Give a Dam or Not?” Seating is limited. For information, visit www.gothistory.org.