The times, they are a ... constant 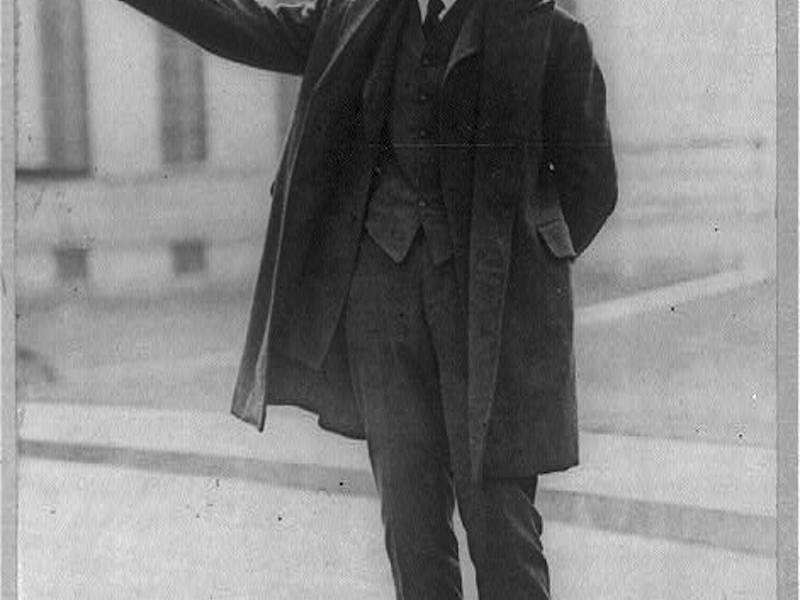 The times, they are a ... constant

Listening to visiting lecturer Ernest Freeberg talk about Eugene V. Debs on Tuesday night at the McHenry County Historical Society Museum in Union, harkened back to Biblical tales of prophets trumpeting the Messiah.

To hear the University of Tennessee history department chairman tell it, the level of selflessness, charity, morality and integrity exhibited by Debs – a former railroad union leader turned socialist – invited comparisons to Jesus. And in similar fashion, Freeberg said, Debs made many people uncomfortable and power brokers very nervous.

Federal restrictions on using the U.S. mail to distribute dissenting opinions about American involvement in World War I effectively drove the alternative press out of business. Socialist newspapers, such as “Appeal to Reason,” were crippled or bankrupted.

No one, it seemed, was quite sure what to make of this native Hoosier and full-time rabble-rouser, particularly when it came to World War I. And a nationwide, government campaign to stomp out any criticism of our military, by encouraging citizens to be model patriots and to report any whisper of dissent by their neighbors, kept the average citizen in the dark.

“They knew [Debs] had said something bad, but they weren’t sure just what,” Freeberg said.

The Espionage Act of 1917 made it a crime to “convey information with intent to interfere with the operation or success of the Armed Forces of the United States or to promote the success of its enemies.” This had a chilling effect on freedom of speech. Nevertheless, Debs, leader of the Socialist Party of America who had received 6 percent of the vote in the 1912 U.S. presidential election, threw caution to the wind in June 1918 at a picnic in Canton, Ohio.

After his speech, Debs was arrested. At trial, Debs argued the Espionage Act violated his right to free speech under the First Amendment. A federal district court rejected his claim and sentenced Debs to 10 years in prison. An appeal to the Supreme Court – affecting 2,000 jailed radicals/pacifists – also failed.

In “Schenck v. United States,” decided March 3, 1919, Justice Oliver Wendell Holmes Jr. wrote the majority opinion for the court, upholding the convictions of a handful of socialists who had created and distributed a leaflet criticizing the draft. It also effectively put an end to any chance that the court would reconsider Debs’ conviction.

Holmes wrote: “The most stringent protection of free speech would not protect a man in falsely shouting fire in a theatre and causing a panic. It does not even protect a man from an injunction against uttering words that may have all the effect of force.

“The question in every case is whether the words used are used in such circumstances and are of such a nature as to create a clear and present danger that they will bring about the substantive evils that Congress has a right to prevent. It is a question of proximity and degree. When a nation is at war, many things that might be said in time of peace are such a hindrance to its effort that their utterance will not be endured so long as men fight, and that no Court could regard them as protected by any Constitutional right.”

But less than a year later, Holmes reversed his stance and dissented in the case of “Abrams v. United States.” He argued that the right to speak freely by dissidents outweighed the remote possibility that their words could cause harm.

“… When men have realized that time has upset many fighting faiths, they may come to believe even more than they believe the very foundations of their own conduct that the ultimate good desired is better reached by free trade in ideas – that the best test of truth is the power of the thought to get itself accepted in the competition of the market, and that truth is the only ground upon which their wishes safely can be carried out.”

The comparisons between that time and today are striking. Then, as now, the U.S. was headed in a “sharp conservative direction.” Isolationist thinking was gaining momentum, and the political will for getting involved in what was considered the fights of others was flagging.

The popular sentiment was to put America first and weather any collateral damage.

Debs invariably put others first, refusing payment as leader of the American Railway Union. He gave food and other gifts he received from friends and “Amnesty Movement” supporters to his fellow prisoners at the U.S. Penitentiary in Atlanta and volunteered as a counselor to prisoners dying of disease or battling drug abuse.

When President Warren G. Harding pardoned him on Christmas Day 1925, Debs’ fellow prisoners gave him a goodbye send-off that could be heard a quarter mile away.

The Illinois State Historical Society recently agreed to a historical marker at the Old Courthouse and Sheriff’s House in Woodstock, where Debs served six months in 1895 for defying a strike injunction.

Photos are to feature representative images of the county shot between Saturday and May 14. Those wishing to participate must register by Saturday and submit their photos by May 31. The $25 entry fee guarantees one of your maximum 10 images will be included in the book, along with its description. For information, visit www.friendsoftheoldcourthouse.org/photo-book-fundraiser.
• • •
Join the historical society when it celebrates its new season and special exhibit, “Waterways and Getaways: Resort Life in McHenry County,” at the museum, 6422 Main St., Union. The opening, from 6 to 9 p.m. Friday, features music, gourmet food and a wine tasting. Visit www.gothistory.org for details.