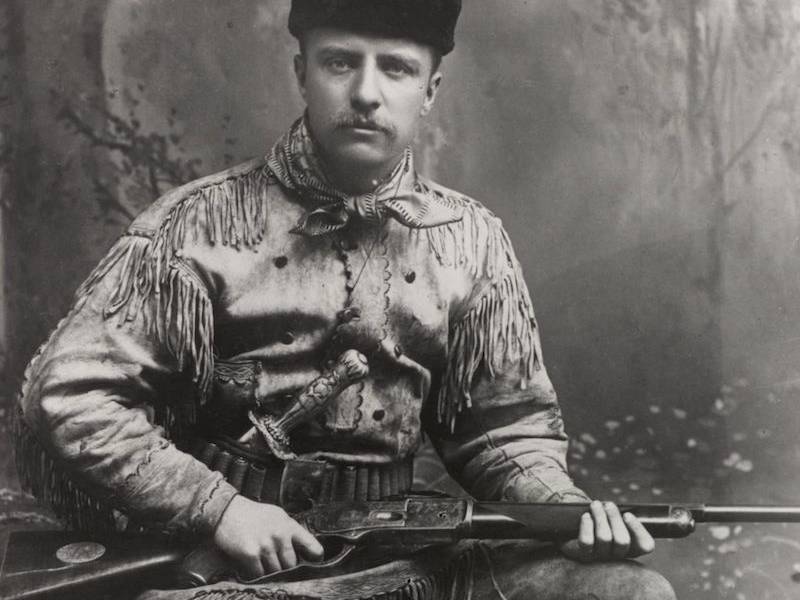 By 1914, Harvard High School graduate Lillian Keating Donovan was beset by serious polio pain. She decided to go “take the water cure” at Warm Springs, Georgia, in 1927. There she met another polio victim and devoted “pool buddy.” His name was Franklin Delano Roosevelt!

It was Roosevelt who nicknamed her “Donney” (for Donovan) and later appointed her as a federal revenue collector in Chicago, once he became president in 1933.

Years before, Theodore Roosevelt ventured out to wilds of McHenry County as part of a cross-country hunting trip. The Huntley Area Public Library explores that connection during a free program at 6:30 p.m. Monday in the Cosman Theater, 12015 Mill St. in Huntley. The estate of local historian Carol Donahue, who died in November, is funding the program.

Terry Lynch, of HFK Presents, portrays President Theodore Roosevelt following his second term in office. He also will reflect on his visit to Huntley as a young man.

T.R. was the uncle of Eleanor Roosevelt, future wife of Franklin. But back in August 1880 he was an adventurous 21-year-old. In a letter to his older sister, Anna, Teddy talks about a stopover, with his brother, Elliot “Nell” Roosevelt, at the Huntley farm of Bruce and Abigail Wilcox.

“After spending a day in Chicago, we decided to come out here to a farm house and stay ten days and then to make a four weeks trip through Iowa and Minnesota,” Roosevelt writes. In subsequent letters talks of shooting “fair quantities of game” that included “prairie chickens in the stubble fields,” plover in the pastures, snipe in the slews and ducks in the ponds.”

With humor and keen insight, Roosevelt describes his hunting party’s appearance as “about as shoddy as mortals could be,” with their unshaven faces, cowhide boots and ragged clothes.

“You would laugh to see us start off in a wagon in our rough, dirty hunting suits not looking very differently from our driver; a stub-tailed, melancholy looking pointer under the front seat and a youthful idiot of a setter under the back one, which is always getting walked on and [is] howling dismally. We enjoy the long drives very much; the roads are smooth and level and the country [is] a vast, undulating prairie, cut up by great fields of corn and wheat, with few trees. …”

Located off North Union Road, the farm spanned 480 acres. In an Aug. 25, 1880, letter to his mother, Martha, whom he affectionately called “Muffie,” Roosevelt talks about how special it was spending time with his brother.

“… He is intensely popular with all the farmers and hunters, for he is a good shot, an indefatigable worker and above all amuses them greatly with his songs. I have been much amused myself by the people in this house, especially the laborers; a canny, shrewd Scotchman; a great strong jovial, blundering Irish boy; a quiet, intelligent Yankee; a reformed desperado (he’s very silent but when we can get him to talk his reminiscences are very interesting – and startling); a good natured German boor who is delighted to find we understand and can speak “hoch-deutch.” There are but two women: a dumsy, giggling, pretty Irish girl and a hard featured backwoods woman who sings Methodist hymns and swears like a trooper on occasions.”

“It’s interesting to us that there is this connection to Huntley,” said Leigh Ann Porsch, spokeswoman for the Huntley Area Public Library District. “We didn’t know anything about this until four or five years ago. In “The Wilderness Warrior: Theodore Roosevelt and the Crusade for America” there are pages where [historian Douglas Brinkley] mentions Huntley. That started our whole Nancy Drew thing.” Porsch said she and local history coordinator Nancy Bacheller have spent a “couple of years” researching Teddy Roosevelt and his Huntley hosts.

•••
The village of Huntley is once again accepting letters of interest from potential developers of the former Catty Corp. property at 11117 S. Church St. The deadline is Sept. 30. Inquiries have ranged from re-purposing the entire building with a mix of commercial uses including a microbrewery/brew pub, to razing a portion of the building and some new construction for a commercial/entertainment use, to a mix of residential and commercial uses.

Additional information regarding the property can be found on the Village’s economic development website at: www.huntleyfirst.com/retail/CattyRFP.php.

In 2017, the village closed on the property – which sits near the railroad tracks south of Main Street and is composed of 2.8 acres and a 33,100-square-foot building – for about $425,000 as part of Huntley’s downtown revitalization effort.

Since then, a metal building on the site has been removed. The village also secured a $50,000 state grant to help fund asbestos abatement. A facility assessment by Dewberry Architects laid out three development options and their projected cots. Renovating the original building and demolish building additions south totaled $5.8 million. Demolishing the building and all on-site structures and building a new two-story, 24,000-square-foot commercial/retail building is projected to cost $7.6 million. Building a brand new building of similar size on the 2.8 acres is expected to cost the most at $9.9 million.

The building has been mentioned as a possible location for a future train station, should economic development advocates persuade Amtrak to reboot a line connecting Chicago and Rockford. Metra could piggyback commuter service on the same track, should the plan receive funding.

Walters, a successful businessman in the auto, implement and lumber businesses, served as city councilman and later as mayor. In 1907, he left office and became Dorr Township supervisor. He remained a Woodstock resident and passed away, with his wife, Anna, and daughter Bertha at his side, in 1946 – shortly before he would have turned 87.

In 1893, Walters bought Lot 11, on block number one – now known as 241 Hoy St. – for $200. In 1894, while Walters was building this modest two-story Queen Anne home, workers in Chicago were dismantling the World’s Columbian Exposition. Today, 125 years later, history lovers will gather at what is now the home of Donovan and Jennifer Day.

Published Sept. 9, 2019 in the Northwest Herald