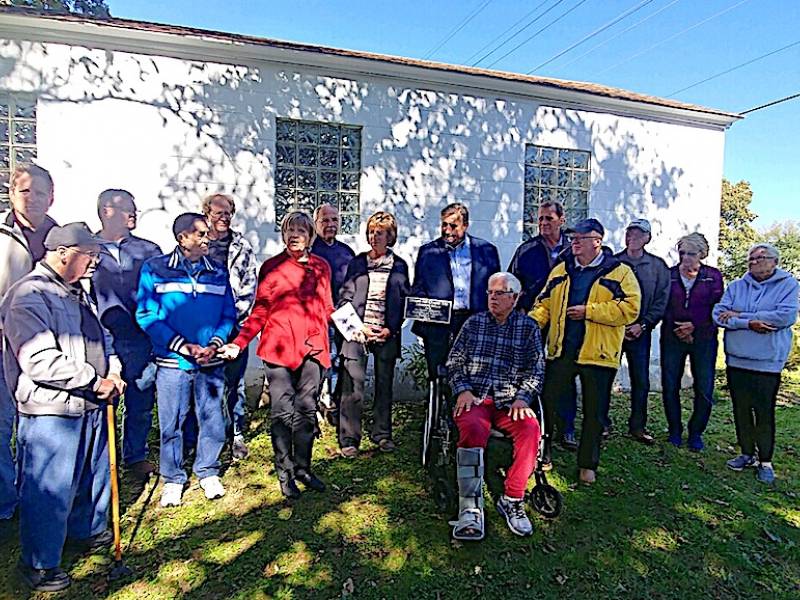 JOHNSBURG – The McHenry County Historical Society and the village of Johnsburg hosted a plaquing ceremony Saturday, Oct. 19, at the historic Schmitt Chapel, adjacent to the Chapel Hill Country Club. They were joined by a number of Johnsburg-area relatives of the original builder.

If you didn’t know it was there, you wouldn’t give this nondescript, small white building a second glance, but behind its block facade is a true gem, Step inside the Schmitt Chapel and embrace its simple pleasures – from original paintings depicting the Stations of the Cross, a modestly adorned altar, to some well-worn, but welcoming, pews. This captivating roadside chapel gathers you in and, in its own way, restores your soul.

Wayside shrines and chapels have been a centuries old tradition across Europe, and Europe is where this story begins. In 1841 Jacob Schmitt arrived in America. He, along with Nicholas Adams, Johann Muller and Nicholas Frett, founded Johnsburg. A year later Friedrich and Anna Schmitt left the Rhineland to join brother Jacob. They set sail for port of New York, on what became a most terrifying voyage, one that encountered stormy seas so rough their crossing took an additional three months.

With winds blowing from all four corners of heaven, Friedrich made a solemn vow if they lived to see America, he would build a chapel to thank God. True to his word, Friedrich erected a log chapel, on this very site, in 1843.

The log chapel was used for nearly 10 years and was replaced in 1853 by a larger 16-by-20-foot brick structure. The following year Anna died, followed by Friedrich in 1875. In 1878 the Schmitt Family enlarged the chapel by eight feet. Used continuously by the community as a place of spiritual reflection, families would arrive in groups to pray for good harvests, favorable weather, and healing for the sick and needy.

Through the years surrounding farmland gave way to the Chapel Hill Golf Course, formerly Smith’s Golf Club, and Pistakee Bay Road became Chapel Hill Road. By the 1950s the 100-old common brick, wood windows and cedar shingles greatly deteriorated. And so, in 1956, the chapel was clad in cement block, asphalt shingles were applied, and glass block windows installed, to prevent golf balls from shattering the windows.

Like its founder, this little chapel has survived its own storms, from indifferent past owners, bank foreclosures, vandalism, growing highway development, to a roof on fire, but miraculously, here it stands.

For more than 175 years descendants of Friedrich & Anna Schmitt have lovingly cared for this chapel and have fought to maintain its existence and future, a future now safe with ownership by the village.

We invite people with architectural and/or historically significant buildings, homes, businesses, or farms, to apply for a plaque. Contact us at: 815-923-2267 or go to: MchenryCountyHistory.org
Like us on Facebook www.facebook.com/pages/McHenry-County-Historical-Society/109520782418180 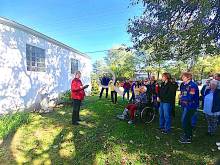