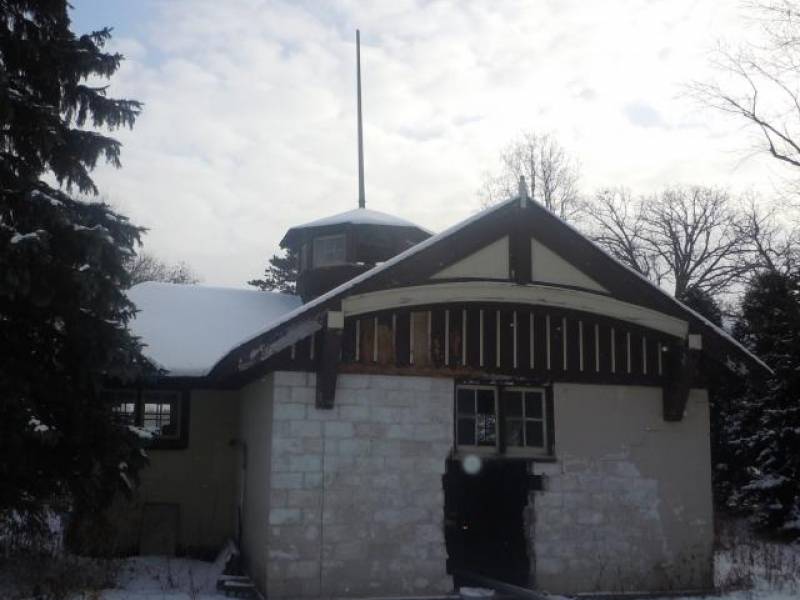 DECEMBER 2013- The unassuming gravestone with the surname “Sayer,” found in McHenry’s St. Patrick Cemetery, belies how powerful and influential this family was at the turn of the century – in McHenry County and Chicago.

Born in Two Rivers, Wis., in 1864, George Sayer and his bride, Rose, had moved to Chicago by 1890. Once in Illinois, he and two partners founded a butcher’s supply company that became, according to an April 13 Chicago Tribune article, “one of the most prosperous businesses [in that field] in the middle west. The business was incorporated at $2 million.”

Although his occupation in the 1900 federal census of the city states that he was a “butcher,” his address places him as living among the noted mansions of the city’s Wicker Park neighborhood. He also owned a chemical company.

Possibly around 1900, Sayer joined a number of wealthy friends in summering at upper- class cottages located along the west shore of Pistakee Bay. Needing to recuperate from some health problems at the time, he decided to build a palatial summer home near the Pistakee Yacht Club. He expanded his land holdings around his Rose Lodge, acquiring a large swath of land along the bay shore accessible at that time only by water.

He had the lodge torn down in 1910 and ordered the construction of a 32-room mansion built with “artificial stone” from the McHenry Artificial Stone Co. This summer residence purportedly boasted a third-floor ballroom, eight fireplaces and an equal number of bathrooms. He called the place Rose Villa.

To the north of the house site where a marshy area and a small creek flowed into the bay, he had a small channel dredged out that led to an ornate boathouse. It covered a docking area where the creek entered the dredged inlet. At the mouth of the inlet, Sayer had a bridge built so he could stroll unimpeded along the shore of Pistakee Bay. That bridge still stands with the name “George Sayer” cut into the concrete.

Long since subdivided, that boathouse and the remnants of four cobblestone duck blind s now are owned by Rocky Beach Road resident Fred Haller – a history buff and owner of the specialty machine shop Industrial Models in Wauconda. He intends to fix the seawall, stabilize the bridge and restore the boathouse back to the way it once looked. But he knows starting from scratch, with sparse photographic evidence, will b e a challenge.

“Pictures would be great,” Haller said. “At least it would give me an idea of what the thing used to look like.”

Sayer is said to have been the wealthiest resident to have lived in that area into th e 1970s. In fact, local historian Nancy Baker – who described the well-heeled residents living on Pistakee Bay in the 1995 book “McHenry County in the 20th Century” – recounted his many land holdings as well as a private zoo Sayer began in 1905. Called Sayer Animal Park or Deer Park, the menagerie included many exotic species of deer and birds often shipped to McHenry by train and then transported by boat to the bay.

Sayer also had a special barn built to house “two sacred cattle from India,” as well as a number of other exotic animals. A short article Sept. 3, 1910, in the Chicago Tribune mentioned the “sacred bull from India” and valued the animal at $10,000. Additionally, he had a small factory built relatively near the house where he could experiment with improving various butchering supply materials and rendering chemicals.

The building continues to be used.

Around the turn of the century and into the 1920s, George and Rose Sayer played important roles in the activities of the Pistakee Yacht Club and hosted numerous events for Chicago’s Prairie Avenue residents.

George Sayer died April 18, 1926, in Chicago. He was interred in Chicago’s Calvary Cemetery while Rose oversaw the construction of an “artificial stone” mausoleum for George and herself (since they had no children) in McHenry’s St. Patrick Cemetery, St . Patrick Church having been their home parish for many years.

Shortly after her husband’s death, Rose sold off 230 acres of the holdings to the Pistakee Country Club. In an article Sept. 5, 1926, the Tribune proclaimed that the club “now appears to have reached its goal of becoming the largest country club in the world.”

All that remains today is a nine-hole, public Pistakee Country Club, which opened in 1941.

Into the early 1930s, Rose spent her winters at the Edgewater Beach Hotel in Chicago. She then moved to her birthplace home in Fond du Lac, Wis., and, after auctioning off the contents of the mansion, left it unoccupied for a time. She died November 22, 1935, in Fond du Lac. Her remains were brought to McHenry to be interred in the mausoleum with her husband.

As to why the Sayer mausoleum in St. Patrick Cemetery cannot be found, Elaine Obencha in, in the “McHenry County Cemeteries, Volume 3,” writes: “... As the century wore on, the mausoleum fell into disrepair. After considerable legal consultation it was decided to demolish the mausoleum [and] provide for in-ground burial for the Sayers. Undoubtedly, Mrs. Sayer would have been horrified at that decision.”

Following Rose’s death, the Sayer properties were sold off to William Skidmore, a man with an unsavory reputation in Chicago and the surrounding area. Skidmore was well-known as a gambler and leading bail bondsman for most of the infamous gangsters who controlled a variety of criminal activities across metropolitan Chicago including McHenry County.

Concerning Skidmore, Baker wrote in the 1995 county history book: “Though much local folklore exists about Skidmore, Capone and others, there appears to be little substance to it.” Further evidence that Al Capone was not a guest at the Rose Villa is the fact that he was indicted by the federal government for income tax evasion in 1931 and convicted the following year. He was in Alcatraz from 1934 to 1939, and upon his release he moved to Miami.

The only proven criminal activity took place when, on a number of occasions in 1939, the Cook County Chief of Police Lester Laird was a guest of Skidmore at the estate. It is alleged that Laird and Skidmore were discussing illegal gambling incomes during those visits.

As the owner of the Sayer property, Skidmore made major changes to the villa. He removed the north and south wings of the property and had those materials used in the construction of a large garage and a greenhouse, both of which survive to the present day. Skidmore was in residence only during the summer months.

Billy Skidmore did not have long to enjoy life at Rose Villa since he was convicted by the federal government for income tax evasion in March 1941. He died in prison Feb. 18, 1944.

Following Skidmore’s death, several different individuals owned the property but did little to maintain it. Much of the 12-acre site was subdivided, and in the 1960s Walt er Gehlaar purchased the mansion and did much to make the home habitable once again.

The former Sayer estate at 1336 Old Bay Road, Johnsburg, recently was sold by George Treutelaar to Robert Carone, co-owner of the Sycamore-based lighting, trucking, event marketing and production service company Upstaging Inc. The new owners began a massive restoration of the house and gardens on the remaining 4 acres in 2006.

Haller hopes to do something on a smaller scale with the little piece of heaven he owns.

“I loved the look of the boathouse and the lagoon,” he said. “I can trace the original Haller to a German watchmaker. It definitely gives you a lot of family pride. That is what is missing in this country, that cohesion and connection to the past that Europe has."