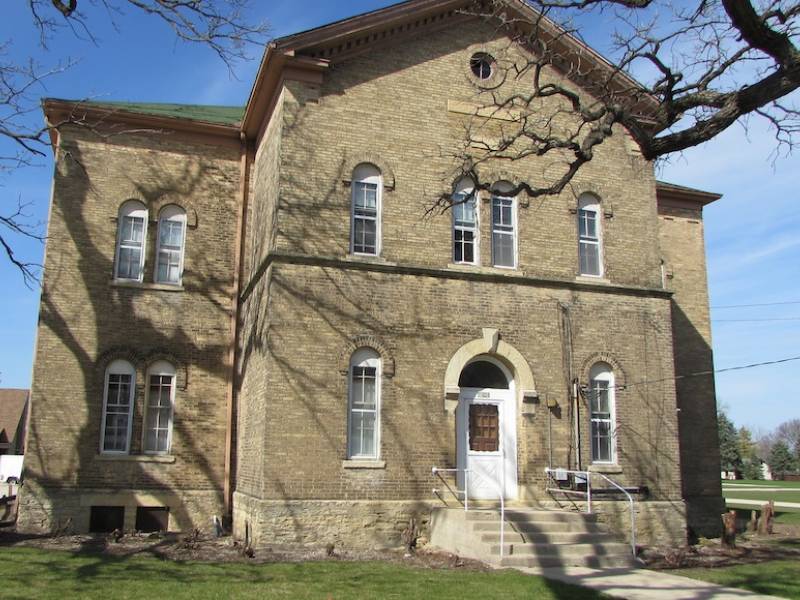 Built in 1875, the two-story brick structure featured two spiral staircases, four classrooms, and a cellar. A 1909 addition, added two more classrooms, a sick room, and a large – more graduated staircase in the back.

The architect, Joseph Mulvey of Aurora, designed at least two other buildings on the National Register of Historic Places: the 12-room, Victorian Martin Mitchell Mansion, dubbed “Pinecraig,” in Naperville’s Naper Settlement, and the Grand Army of the Republic Hall in Aurora. The latter was slated for demolition in the 1960s until public outcry forced the city to change its plans. The Greek Revival, octagonal building now serves as a museum.

According to Crystal Lake architect Brice Alt, who surveyed the school’s exterior at the behest of the Huntley Historic Preservation Commission, former high school “has plenty of life left in it.”

“I saw no external signs of structural failure that would require immediate action,” Alt wrote in his report. “After 142 years, the walls are still plumb, the majority of the brick and mortar is sound, and the foundation is not sinking. Even the steel lintel above the back door is only lacking a fresh coat of paint. This schoolhouse was built to last.”

The First Congregational Church of Huntley, which has submitted a demolition permit, bought the property in 2006 – which had been converted for apartments around 1955 – for future expansion. There is nothing on the demolition checklist used by the village that requires the submission of a future site plan or takes into account the historic nature of a structure.

The McHenry County Historic Preservation Commission unanimously supported a resolution to preserve the structure at its April 2017 meeting. To read it, click HERE.