No stopping the tornado of football sentiment

Home » No stopping the tornado of football sentiment 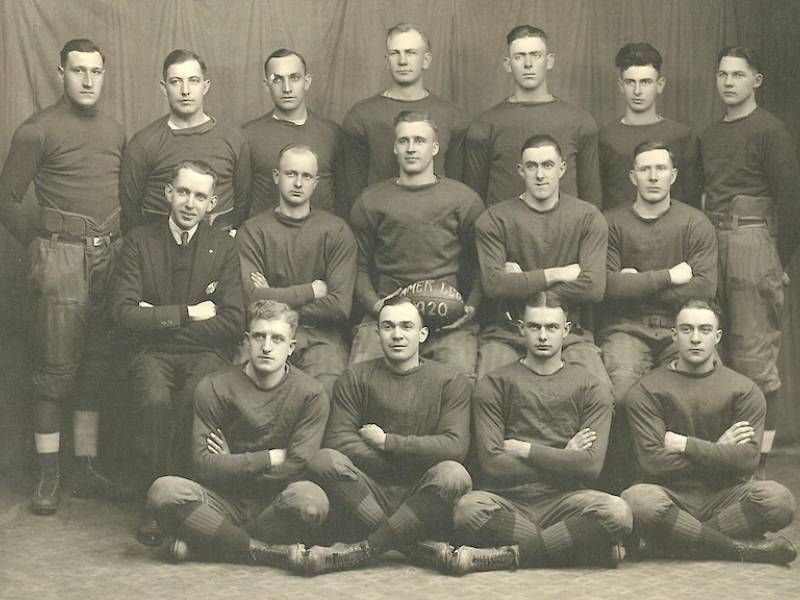 No stopping the tornado of football sentiment

With the Super Bowl still fresh in our minds, it is worth revisiting another homegrown champion of the gridiron – the Golden Tornadoes of 1920.

The Sept. 16, 1920, edition of the Woodstock Sentinel reported on the formation of a new American Legion team in Woodstock – gleaned from the proverbial cream of the crop, including then halfback and future county Sheriff Lester Edinger.

“Eighteen of the 35 names turned in at the meeting have played Army and college football under the best coaches,” the Sentinel reported. “Lester ‘Doc’ Edinger was chosen captain of the team. Everyone is acquainted with Doc’s ability on the gridiron.

“With his executive ability and four years’ experience at Army football, he is sure to mold together a fighting machine that will plow through all football teams in this section of the country.”
Lawrence Reed, a Legion member who also coached the top-notch Woodstock High School team that year, was tabbed to lead the squad – ably assisted by Clyde Zoia.

The paper proclaimed that the Notre Dame graduate’s experience playing guard in South Bend, Indiana, and for the powerhouse Racine Cardinals of Chicago would be a tremendous boon.

“Woodstock lovers of the pigskin are looking forward to a series of first-class games,” the Woodstock American reported.

They were right. The team went 7-1, winning all but its initial game against the Rockford Specials – which they later avenged.  In fact, the Tornadoes outscored opponents 188 to 25 en route to the division crown.

Large crowds filled the stands at the county fairgrounds to watch them whoop up on the likes of the Chicago Chalmers, Rockford Wolverines, Elgin Mohawks, Beloit (Wis.) A.C. and the powerful Madison (Wis.) Badgers … “among the crack football teams of the Wisconsin League,” according to the Woodstock American.

In a 20-0 pounding of Beloit A.C., the Sentinel writer relays a conversation overhead on the field about Woodstock center Jack Dressell, who wound up scoring a touchdown.

After the end of World War I, “town” football teams took off around the region and fed a growing appetite for a game that had been championed by college teams.

The National Football League didn’t get its start until 1920. And college football still might be as popular as the NFL today, if anyone could watch it for free.

It always helps to have Dick Butkus on your team.

But nowadays, a cord-cutter like myself would not be able to watch those games. Samuel Chi of RealClear Sports said college football signed a 12-year, $7.3 billion deal to have all of its games – playoffs and all of New Year’s bowl games – televised exclusively by the network through the 2025-26 season. But the partnership actually dates to 2010, when the former Bowl Championship Series moved from Fox to ESPN for its last four years.

According to the Sporting News, broadcast networks will have gone 16 years without airing a single major college football bowl game by the time the current College Football Playoff TV deal expires in 2026.
The result should not surprise anyone. The Associated Press reported that College Football Championship rematch between Clemson and Alabama attracted 680,000 fewer viewers on TV and online than last year’s game.

It also reported that one-sided games, and the ill-fated decision to play the college semifinal tilt on New Year’s Eve, resulted in a 13 percent drop in TV ratings for New Year’s six bowls as compared with the previous year.

And the storied Rose Bowl? It had the fewest viewers since 1999.

But I think I have a solution. What we need are fewer gold diggers and more Golden Tornadoes.

• • •
The McHenry County Historical Society & Museum will host its fifth annual Antique Appraisal Day from 1 to 4 p.m. Feb. 25, at the museum, 6422 Main St., Union. Up to three items are allowed per person in eight broad categories.

Advance registration is encouraged. Thanks to the generosity of our experienced appraisers, all proceeds will benefit the nonprofit society. For information, visit www.gothistory.org.

• Kurt Begalka is the McHenry County Historical Society administrator. He may be reached at kurt@mchenrycountyhistory.org.