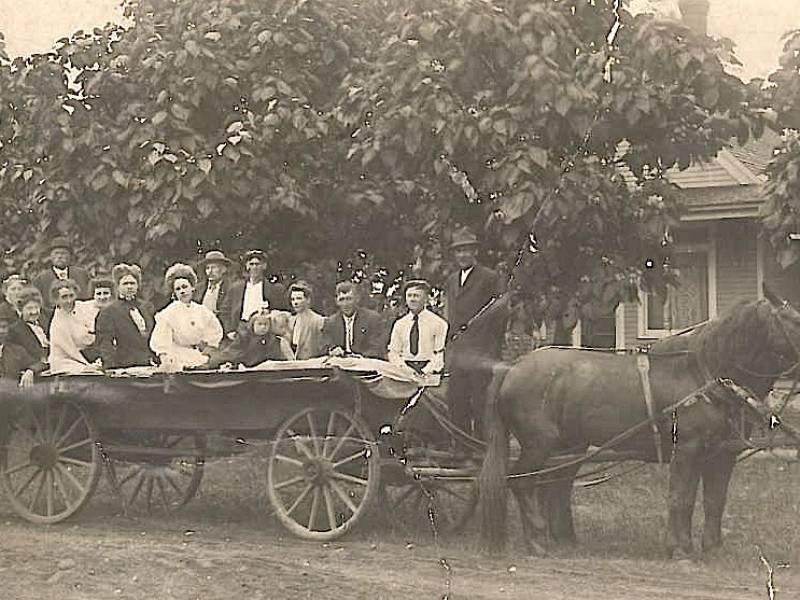 Swedish immigrants Mons and Cecilia (Anderson) Peterson had five children – Louis, Gusta, John August, Minnie and Esther. Minnie married Charles Nelson, a foreman at the fitting plant at Terra Cotta Industries. Among those pictured on the wagon are Minnie (center) alongside her daughters, Marian and Eleanore. Author Kurt Pearson said that of the estimated 500 Swedes from Crystal Lake he researched, 380 people were related in some fashion. “America is really a melting pot,” Pearson said.

Crystal Lake’s “Swedenberg” was a community within a community, not unlike Pilsen or Chinatown. And although its original settlers had dispersed by the 1950s and its borders had blurred, its legacy lives on today in the city’s architecture and cultural identity.

Kurt Pearson, McHenry resident and Crystal Lake native, began researching Swedenberg about five years ago, sparked by the knowledge that his grandfather – Nels P. Pearson – had lived in that locale on the west side of Crystal Lake. This largely ethnic neighborhood was bordered north to south by Woodstock Street and Crystal Lake Avenue, and east and west by Peterson Parkway and Oak Street.

Pearson said Peterson Parkway’s likely namesake was Mons Peterson, a school board member and community leader who operated a large pickle plant and clover-drying business in that area. Peterson lived near the intersection of Dole Avenue and Crystal Lake Avenue, nicknamed “Peterson’s Crossing.” He entered the pickle business in 1880, and before long, he was processing 20,000 bushels of produce a year in 26 vats. The Mons Peterson and Sons plant operated until 1917.

Peterson also operated clover- and blossom-drying businesses in Crystal Lake and Johnsburg. The products were used as medicinal ingredients. Children earned 2 cents for every pound of blossoms picked. According to a memoir from B. Conrad Berg, who lived in Swedenberg until he left for college in 1910, the neighborhood was close-knit – and somewhat redundant. There were Swansons and Swensons, Lindahls and Lundahls, and more Nelsons than pickled herring.

“There was the red-bearded Anderson, the ‘Norwegian Anderson,’ and the ‘Moline Andersons,’ Berg wrote. “The ‘Tall Anderson’ worked for years on the action repair crew for the [Chicago &] North Western. Larson lived at the end of Lincoln Parkway, where it joined the farm of Mons Peterson to the north.”

Berg noted that the Swedish immigrants hailed from different provinces and spoke with different dialects. Further complicating communication was a reliance on Swedish inside the home and preponderance of English spoken outside of it. Swedenberg became segregated by choice, but there were instances where sons and daughters married people of different nationalities and “religions.”

By that I mean the traditional Swedish Lutheran church and Swedish Covenant Church.

“If I was to write a musical about Swedenberg, the conflict of the story would be religion,” Pearson said. “The rift developed between the national church and group sometimes referred to as the ‘Readers,’ who wanted to interpret the Bible in their own way.”

In addition to those buildings, other signature structures with Swedish ties include the pump house in McCormick Park and the American Legion (Park Place) hall on Woodstock Street. Swedish craftsmen also plied their trade as mold makers at Terra Cotta Industries, watchmakers in Elgin and as instrument makers. August Carlstedt built a violin factory about 1905 on the northwest corner of Woodstock Street and Ridge Avenue, where he also made Ideal-brand guitars.

All told, Pearson chronicles the lives of more than 500 Swedish immigrants or their children who settled in Crystal Lake – from the jobs where they worked six 10-hour days a week to their leisure time to the civic organizations they joined. Pearson’s grandfather belonged to the Independent Order of Vikings Thyrfing Lodge No. 34 in Crystal Lake.

“All of these families have great stories,” Pearson said. “It was so fun to see what their lives were like and what they did.”

Pearson credited Berg’s memoirs with putting him on this path of exploration.

“That got me intrigued as a starting point,” he said. “I had never seen anything like this done before: part genealogy book and part town history.”

Take a chance at winning the Heritage Quilters’ latest effort, “Threads of Friendship,” at this year’s Countryside Quilt Show in Crystal Lake. The event runs from 9 a.m. to 6 p.m. Sept. 17 and from 9 a.m. to 4 p.m. Sept. 18. The intricate, striking quilt features a nine-patch Friendship Star pattern featuring 64 blocks in cream and turkey red. Visit www.gothistory.org for details.

• Orders for copies of Kurt Pearson’s two-volume, hardcover book, “Swedenberg,” are being taken by the Crystal Lake Historical Society through Sept. 15. The 1,200-page effort features more than 1,000 vintage photos as well as maps. The cost per set is $100, and orders should be available for delivery or pickup in November. All proceeds benefit the Crystal Lake Historical Society. To order, visit www.cl-hs.org.

• Pearson will present “Building Crystal Lake” as part of the Crystal Lake Park District’s “Lunch & Learn” lecture from noon to 1:30 p.m. Oct. 27 at the Colonel Palmer House in Crystal Lake. Admission is $10 for residents and $15 for nonresidents. Advanced registration is required. Visit www.crystallakeparks.org for details.