Milk does the body good ... if you can get it 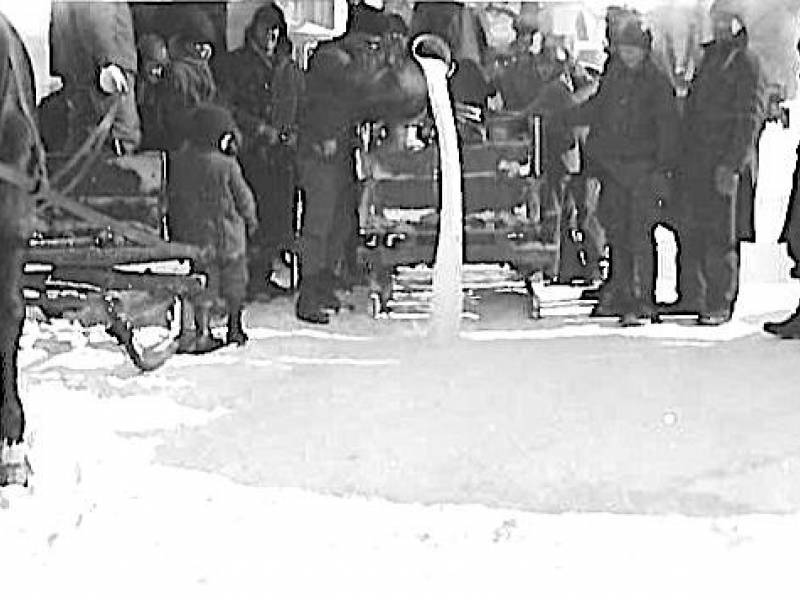 Milk does the body good ... if you can get it

Tension gripped the county back in the winter of 1929 – especially if you were a dairy farmer.

The Jan. 18 edition of the Chicago Daily Tribune reported that an additional 3,100 pounds of milk, the equivalent of about 360 gallons, was among 7,100 pounds of milk destroyed by angry dairy farmers over two days.

Then, as now, dairymen were after what they considered a living wage – fair compensation for the raw milk they shipped into Chicago by train and truck. And toward that end, they were willing to take extreme measures against the dealers whom they believed were making unwarranted profits at the expense of themselves and consumers.

“… Farmers also believe that the difference between the 14 cents per quarter charged the consumer is too great – the $2.60 per hundred pounds being less than 5½ cents per quarter. Farmers declare they get starvation wages for their efforts and practically no profit on their investment, while the “cream” goes to the Chicago dealers.”

The latest in a series of price disputes prompted area dairy farmers back then to call a strike, when distributors balked at paying $2.85 per hundredweight for milk – an increase from $2.50. Local “farmer gangs” blocked roads into Chicago.

They set milk supplies on fire, contaminated milk with kerosene and seized trucks … once the milk had been sold to dealers. On Jan. 18, 1929, 60 picketers stopped a Bowman Dairy Co. truck and poured its contents – an estimated 2,325 gallons of raw milk originating from McHenry and Lake counties – into a ditch.

An arbitrator eventually set the price at $2.64 per 100 pounds at country stations, plus one cent per 100 pounds to be paid by distributers to the Pure Milk Association. The decision was considered to be victory for producers.

It is unlikely a similar situation will unfold today. However, tough times for dairy farmers are getting tougher. Dan Ziller, who milks 60 Holsteins on a farm off of Ernesti Road in Huntley, blames restrictions on the amount of milk shoppers can buy, higher milk prices in stores, changing beverage tastes insufficient marketing and the loss of markets for prompting some dairymen around the country to dump milk.

“The milk supply chain has seen a host of disruptions that are preventing dairy farmers from getting their products to market. Mass closures of restaurants and schools have forced a sudden shift from those wholesale food-service markets to retail grocery stores, creating logistical and packaging nightmares for plants processing milk, butter and cheese. …The dairy business got hit harder and earlier than other agricultural commodities because the products are highly perishable – milk can’t be frozen, like meat, or stuck in a silo, like grain.”

Ziller said he has sold milk that costs him $17 a hundredweight to produce for as low as $12 per hundredweight to Muller-Pinehurst Dairy in Rockford. He believes it is unsustainable and unnecessary – particularly with the burgeoning demand for milk products by food pantries around the nation.

“We have to put [this milk] where it’s needed. Don’t dump it on the ground,” he said.

Alan Ainger, 38, runs 290 head of Holsteins and Brown Swiss near the Wisconsin line north of Alden, said it costs about $17 per hundredweight to produce milk that he is selling for $15.37.

The cooperative buying his milk, the Dairy Farmers of America, has ordered him and other farmers to cut production 10 percent by May 1. Doing so will require him to cull his herd by selling cows to other or send them to market.

“With milk prices down $7 to $8 a hundred from last winter, and then having to cut the amount of milk we produce, that is kind of a double hit,” Ainger said.

Still, there are some positive signs. Dairy Farmers of America has proposed buying 44 of the bankrupt Dean Foods’ plants for $425 million, there is talking of merging the similarly bankrupt Borden Dairy Co. with Dean, and the latest federal stimulus bailout includes $16 billion in direct payments to farmers plus $3 billion in government purchases of agricultural products.

Ainger said his family farm near Alden dates to 1946. Prior to that his ancestors farmed in Greenwood and Franklinville. “I’m the fourth generation to farm,” he said. “My goal is to make it so my kids will be the fifth.”

A friend sent me a poem, purportedly written in 1869 and then reprinted during the 1919 influenza pandemic.

Like this darn virus, many on online viral posts are unpredictable and unreliable. It turns out the poem, actually called “In the Time of Pandemic,” was written last March by Catherine “Kitty” O’Meara – a retired teacher and chaplain who lives near Madison, Wis. You can access this poem, and others, on her blog, “The Daily Round.”

And the people stayed home.

And they read books, and listened, and rested, and exercised, and made art, and played games, and learned new ways of being, and were still.

And they listened more deeply. Some meditated, some prayed, some danced. Some met their shadows. And the people began to think differently.

And the people healed.

And, in the absence of people living in ignorant, dangerous, mindless, and heartless ways, the earth began to heal.

And when the danger passed, and the people joined together again, they grieved their losses, and made new choices, and dreamed new images, and created new ways to live and heal the earth fully, as they had been healed.

“… Look at any critical point in human history, and you'll see explosions in the arts: painting, writing, music, theater, dance. Such times reach into our souls and demand responses that articulate what our functioning level of dialog cannot,” O’Meara said in an email. “They pull from metaphor, and symbol, from all of our emotions, and losses, and dreams, and hope ... and they synthesize all of it to create a panoramic vision of the ways such times are/have been experienced. They lift up the forgotten and neglected and rightly/justly identify the heroes/heroines and villains. And they demand and often initiate change.”

Let us hope, at the very least, in the end this pandemic makes the world a better place.

At this point you’ve washed and vacuumed the cars. You’ve cleaned your garage and basement storage room - twice. You’ve played Chutes and Ladders with the kids – and without them – more times than you can count. You’ve even attempted to sort through the kitchen junk drawer … before thinking better of it.

You need some homework.

Fortunately, the McHenry County Historical Society has just the thing to save your sanity: a to-do list that will inspire you to rediscover your roots, record this moment in history and contribute to the collective historical archive. For additional details, visit www.gothistory.org. Consider these projects:

• When you are sorting through stuff, put aside those important family photos and documents and consider donating the originals, or copies, to the historical society. We maintain an extensive family biography files in the research library at the museum, located at 6422 Main St. in Union. Be honest: What are you going to do with it, anyway? Pictures on your smartphone will get lost or their accompanying details forgotten. And that scrapbook or photo album? The kids don’t want it, but their kids or grandkids could be desperate for it years from now.

One of our essential roles is to provide a safe depository for that information. Instructions on how to share this information can be found on our website.

• Speaking of smartphones, the next time you out at the grocery store or walking around the neighborhood, keep an eye out for visual demonstrations of how people are coping with the pandemic. The historical society has developed a COVID-19 questionnaire to help people record their experiences, including photos, for posterity. Fifty years from now people will be hungry to know what this was like. You can tell them.

• Graduating seniors from a McHenry County high school have through May 8 to apply for MCHS’s annual $1,000 Nancy Fike Scholarship – through May 8. The financial award will be given on behalf of the student - who plans to study education, history or the social sciences - to his or her chosen college or university. This year’s topic marks the 50th anniversary of Earth Day.

• We have developed take-home Pioneer Activity Kits, geared toward children in third through fifth grades. Visit the MCHS website for information on how you can pick up one of these free kits.