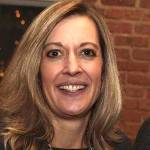 Mary, with her husband Bruce and their three children, moved to McHenry County in June 2011. Her background working with historical societies led her to contact the McHenry County Historical Society where she became involved as a volunteer. In March of 2012, she joined the board of directors.

Previously she worked for the York County Heritage Trust in York, PA as a project catalog coordinator. During her time with the Trust, Mary inventoried, accessioned, and created a digital catalog of the Pfaltzgraff archival collection. As a volunteer for the McHenry County Historical Society, Mary worked with the postcard collection and textiles utilizing PastPerfect museum software. Mary currently works as the Event and Volunteer Coordinator for Turning Point in Woodstock.

As a board member for the McHenry County Historical Society, Mary has worked on the Education, Technology, and Strategic Planning committees. In 2015, as vice president of the board she chaired the site usage committee, worked with the disaster planning taskforce and was a member of the governance committee which interviewed candidates for the new Membership and Volunteer Coordinator position.

Mary’s love of museums and introduction to history began at an early age. Her father was a docent at the Oakland Museum of Natural History in California and Mary often accompanied him, manning the information desk while her father gave tours. Throughout her adult life Mary has enjoyed visiting numerous historic sites having lived in five states across the U.S.

As the sole organization for historic interpretation and education encompassing the entirety of McHenry County, Mary is excited to be involved in such a rich and diverse organization. She looks forward to championing its continued growth, while still maintaining its historic past.