Looking history in the eye can make you blink

Home » Looking history in the eye can make you blink 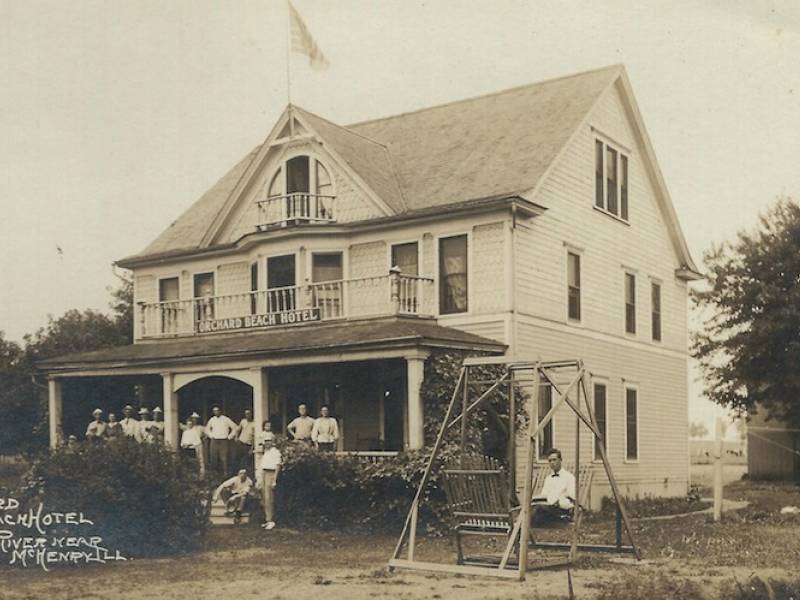 Looking history in the eye can make you blink

Thanks to the village of Huntley for allowing a bunch of us history types to do a short walk-through of the former H.D. Catty Corp. building on Church Street. Even to the most casual observer, the development potential is apparent.

The former H.D. Catty Corp. building at 11117 S. Church St., built about the turn of the century, is among the oldest buildings in Huntley. But its future remains very much in doubt, as the village weighs development proposals that could involve leveling the entire 33,100-square-foot structure.

Over the years, the building housed dairy and brewing businesses, an implement dealer, gasket company and then Catty, which relocated to unincorporated Harvard in 2006.

Bruce Scott, president and owner of Catty, said he arrived at the Huntley plant in 1988 – a year after his dad bought it and pioneered aluminum foil packaging in the U.S.

During his tenure there, the company worked with the village to improve drainage and upgrade the plant – including removing an old, wooden tool crib; removing old fire-suppression equipment stored in a cement pump house on the property; and upgrading the infrastructure. The building once had four boilers.

“I toyed with having a walkway to downtown Huntley and putting in a microbrewery, like they want to do at Union Special, perhaps shops and restaurants,” Scott said. “But I recognized I was in the aluminum foil converting business and not in restaurant restoration.”

The village bought the abandoned plant from Catty in February 2017 for $435,690. It currently is zoned for manufacturing.

The proposal deadline for redeveloping the nearly 3-acre site was extended to  4 p.m. April 30. Visit www.huntleyfirst.com/retail/CattyRFP.php for details. Pictures from my visit are available on the McHenry County Historical Society website at www.gothistory.org.

Chronicling history can be an inexact science.

Rumors of rum-running gangsters, underground railroad stops and historic hauntings – nearly all unsubstantiated – populate our imaginations. And like Facebook news, the more it gets shared, the more people believe it.

So it wasn’t all that surprising when Huntley “history detective” Jake Marino informed me that the place tradition assured us was the former Orchard Beach Hotel was in fact nothing of the kind.

When the McHenry County Joint Council of Historic Groups toured “The House of Seven Gables” in the fall at 1812 N. Riverside Drive in McHenry, doubts already arose. There was something about the 3,654-square-foot house that just didn’t seem quite right. It was set too far back from the Fox River. The roof lines didn’t seem to match up. And the ancillary building on the beautiful 2.75-acre lot could not be explained easily.

Enter Marino. Jake rolled up his sleeves and poured through property records. It turned out that the house we toured had some history attached to it, but it had nothing to do with golf.

It had been owned by Noah Pike – the “Father of Pistakee Bay.” The lumber dealer is believed to have built the first cabin along Pistakee Bay in 1884.

The Orchard Beach Hotel, operated by Krist and Elna Norager, actually was located farther north on lots 35-37 along North Orchard Beach Road. The Noragers bought that property, along with lot 39, from August Larsen. Larsen bought the land from A.L. Howe in 1906.

An obituary in the McHenry Plaindealer, after the death of Lucy (Shelton) Pike on July 12, 1928, notes “The Pikes built a home on the river near Orchard Beach, intending to live here both winter and summer. This large house later was sold to Ben Stilling.”

Before the sale, a June 1917 Plaindealer article touted the hotel and grounds as “one of the prettiest spots along the entire course of [the] Fox River.” The paper applauded the “beautiful little park,” a large garage for visitors and a “first-class” ice cream parlor.

The Pikes’ former house, now owned by Kathleen Ballsteadt, is for sale. The asking price is $485,000.

I was pleased to read that county Dial-A-Ride service has been extended to Union – home to three museums, including your McHenry County Historical Museum.

“Museums as Economic Engines” reveals that museums support 726,000 American jobs and directly employ 372,100 people, more than double that of the professional sports industry, according to the U.S. Bureau of Labor Statistics.

The study, conducted by Oxford Economics with support from the Andrew W. Mellon Foundation, found that every $100 of economic activity created by museums generates $220 in other sectors of the U.S. economy. In Illinois, the positive economic impact is about $2.7 billion.

It also concluded that U.S. museums generate more than $12 billion a year in tax revenue to federal, state and local governments – $683.2 million of that in Illinois alone.

The second report, “Museums & Public Opinion,” surveyed more than 2,000 Americans about museums. It found that 97 percent believe that museums provide valuable educational experiences to their communities.

The MCHS Green Lantern Corps is not a group of superheroes. But we are history-minded. Support us, in person or with a donation, on April 22 at the McHenry County Human Race. All proceeds benefit our annual Nancy Fike Scholarship for college-bound graduates. For information, visit www.gothistory.org.

Published April 16, 2018 in the Northwest Herald