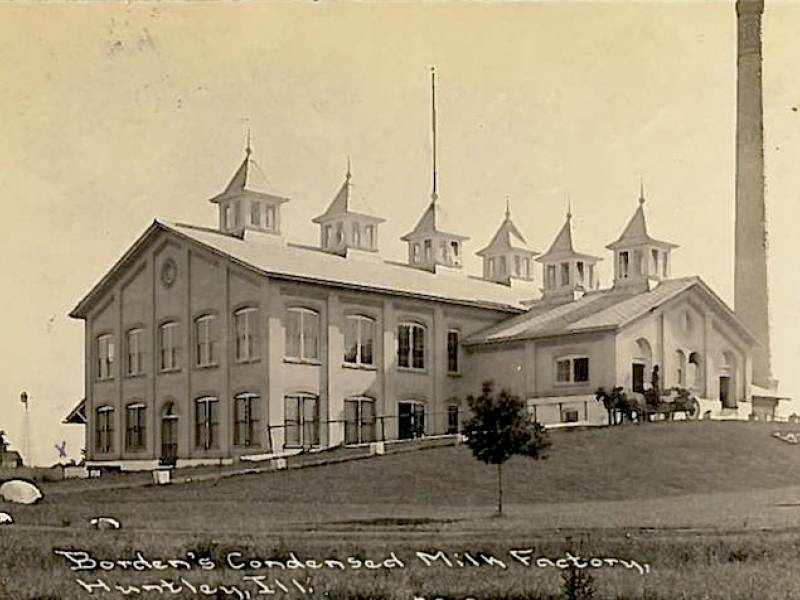 Could cold beer be sold here?

Let’s be honest. Can you ever really have too many local craft breweries?

If all goes as planned, Sew Hop’d Brewery hopes to open its doors later this year at Route 47 and Borden Street.

Combined, they have worked for more than a century at Union Special.
In 2013, they bought the building. There now are two dozen tenants inside this highly visible incubator space. The 2,700 square feet slated for the brewery, Hitpas said, consists of the former boiler room and coal bin in the old Borden plant.

The building, with its gabled roofs and towering smokestack, was awe-inspiring.

The Aug. 23, 1907, edition of the Woodstock Republican noted: “Work on the Borden plant is progressing rapidly, and will be rushed to completion, so that it will be in operation the later part of September. The building is of white pressed brick, and when completed will be a model building in every respect.”

When Borden’s stopped production, sometime during the 1920s, the Victor Mey milk plant moved into the building, which then remained vacant for a number of years. Union Special Machine Co. arrived in 1948 and – for a period of time – enjoyed meteoric growth. Originally established in 1881, four building additions came in the 1950s, followed by the construction of a new technical training center in the 1970s. A 10th expansion in the 1980s increased square footage to 418,000, when the now Union Special Corp. consolidated its Chicago sewing machine operations into the Huntley manufacturing plant.

“It grew and expanded into the current hodgepodge we have today,” Hitpas joked.

Hitpas said the brewery and 80-seat taproom represent a marriage between the owners’ career connection with the building and their passion for beer.

“We’ve grown up with the business and the building,” Hitpas said. “We have a connection with the Huntley community. Also, because we sell [sewing machines] around the world, we drink beer around the world – and we know the craft beer craze is coming on.”

Pending Village Board approval, initial beer offerings likely will be ales and porters, Hitpas said, including some IPAs and wheat ales.

In yet another example of science fiction mirroring reality, the personal contact involved with buying food soon might resemble that of a “Star Trek” food processor.

Amazon’s futuristic Amazon Go store uses a combination of sensors and cameras to track what each shopper takes off shelves so it automatically can bill them for their purchase without their having to stop to pay on the way out. Customers simply scan their phone using the new Amazon Go app when entering, and their Amazon account will be charged for items taken.

The company plans on adding up to a half-dozen more Amazon Go stores this year, since opening the first in January in Seattle. Add to that its roster of 450 Whole Foods locations around the nation, as well as rumored interest in vacant Toys R Us buildings, and this way-out technology might be right around the corner.

McDonald’s and Panera have announced plans to install kiosks that allow customers to order and pay for their food in thousands of stores. Walmart’s new Project Kepler uses computer vision to “reimagine” the in-store shopping experience. And the latter recently began installing robots in 50 stores around the country. The 6-foot-tall, wheeled towers navigate aisles like Rosie from “The Jetsons,” scanning for out-of-stock items and incorrect labels.

It’s the next great thing … unless it isn’t.

A couple of summers back, I recall reading the obituary for VCRs. The last manufacturer, Funai Corp. of Japan, announced their passing … in passing; victims of dwindling demand and even fewer parts.

In the years after Ampex Electric and Manufacturing Co.’s first use of the technology in 1956, the VCR eventually reached 95 percent of American households in the 1990s.

“The wondrous machine would whirl to life at any hour of day or night (as long as you could figure out how to set the timer),” the Chicago Tribune wrote in its requiem. “Then, hours or days later, a viewer could gorge on “thirtysomething” or “All in the Family” or “MASH” or “Miami Vice” or “St. Elsewhere” or “Cheers.”

So, cheers. We might have Wi-Fi and the Cloud nowadays, but we also have the next generation of R2-D2s and self-driving Herbie “Love Bugs” idling in the back lot. Perhaps things haven’t changed as much as we thought.

Join local historian Craig Pfannkuche at 3 p.m. Monday for a discussion about Harvard’s Lillian Keating Donovan, a relatively unsung, unknown pioneer in the fight against polio – and a pool buddy of President Franklin D. Roosevelt. For information, visit www.gothistory.org.

• Kurt Begalka is administrator of the McHenry County Historical Society. He can be reached at kurt@mchenrycountyhistory.org.

Published April 2, 2018, in the Northwest Herald