History of Camp Algonquin should be part of its future

Home » History of Camp Algonquin should be part of its future 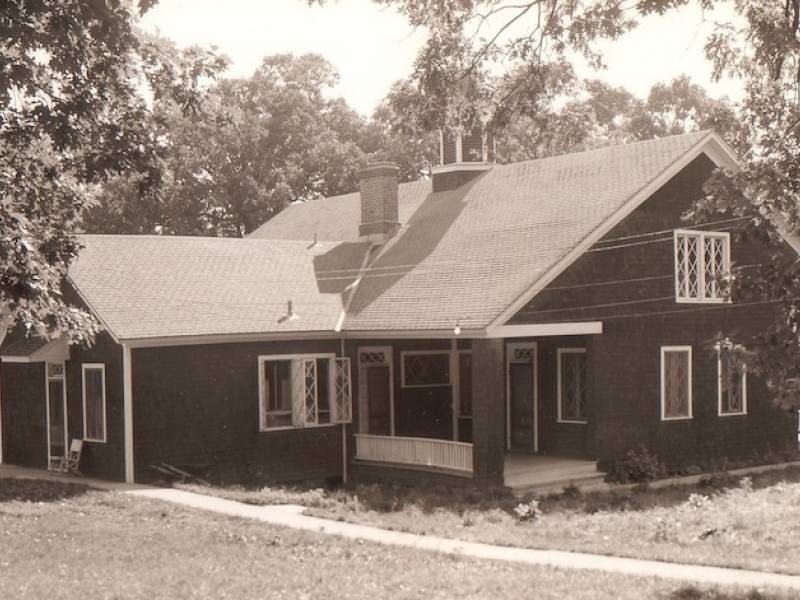 History of Camp Algonquin should be part of its future

A century-old, 116-acre fresh air camp off Cary-Algonquin Road could re-emerge into a brave new world, the world of “glamping.”

No, this is not a medical condition. Rather, it is the marriage between glamour and camping. A proposal under consideration by the McHenry County Conservation District would rent out “unique year-round seasonal dwellings,” including tiny homes on wheels and Airstream trailers. Fees estimated at between $150 and $300 a day would include a slate of activities ranging from cooking classes to yoga to movie nights and campfire concerts.

“We’re excited about it,” said Amy Haier, who along with her husband, Todd Donohue, own North Barrington-based ModCamp LLC. “I didn’t even know about the camp when I reached out to the district. I knew about different sites and about Glacial Park, but this was something that they brought to our attention. … It felt like this was a great fit because of the footprint and history, and because it was already closed.”

This “something” is one of only four camps built in the U.S. during the “Fresh Air in the Country” movement, which started during the late-1800s. This movement was fueled by the belief that spending time in a rural environment would alleviate the problems caused by inner city living. In 1907, Camp Algonquin was established as a fresh air camp on 20 acres along the Fox River.

The camp was supported by the Chicago Bureau of Charities, Chicago Board of Trade, Chicago Tribune, Oak Park churches and numerous private donors. In 1910, noted landscape architect Jens Jensen was hired to produce a plan for the original 20 acres of the camp.

In later years, camp operations were taken over by Metropolitan Family Services, a Chicago-based social services agency. By 2004, because of financial difficulties, Metropolitan Family Services sold the camp to the McHenry County Conservation District. McHenry County put up $1 million of the $8.35 million purchase price to preserve its ability to someday run a northern bypass through the site.

Short of funds, MCCD sought potential users of the camp until it could craft a master plan for the site. The YMCA of McHenry County leased the 116-acre camp from 2005 until it filed for bankruptcy in 2011.

Twenty-six of the 54 buildings on the campground have been demolished. MCCD previously committed to saving four: a circa-1900 dairy barn, one of three Tribune dormitories, the Board of Trade Recreation Hall (included in the ModCamp plan) and a one-time honeymoon oasis turned counselor cabin nicknamed the Ritz. The latter, built in the 1950s, was hit by a tree and sustained significant damage.

A detailed site plan from Jensen in February 1911 depicted 16 buildings – including the dairy barn, the 1909 Tribune dormitories and the recreation building – parts of which date to 1909. The Jensen rendering, the earliest known plan of the camp, also called for a swimming pool, council ring, vegetable gardens, native landscaping, pedestrian paths/trails, carriage roads, benches and bridges.

There is no mention of luxury trailers for overnight guests. But that does not mean there couldn’t be. Now part of the Fox Bluff Conservation Area, the camp provides strategic access to the Fox River amid a wooded oasis.

“The history of that site is remarkable, and we need to pay tribute to that,” MCCD Executive Director Elizabeth Kessler said. “The key is to restore something that is existing, and that makes the best use of the space. … I think there is a way to connect the dots, and we can play a role in that.”

MCCD deserves credit for thinking outside the box and exploring public-private partnerships at a time of rising local taxes and shrinking state funding. Pending approval from MCCD’s board, it is unlikely the camp will open before 2020. The exact number of units, the engineering required to site them in the right places and a revenue-sharing agreement still must be worked out.

“We wanted to bring a stimulus to some property that needed [tender, loving care],” Kessler said. “Early on, it’s been a nice collaboration. … If they are successful, we’re successful.”

Although it is true that Haier and Donohue spent 20 years in the digital marketing industry, they assured skeptics that they’ve done their homework – traveling to “glam” camps on the West Coast and consulting with experienced people in the camping industry.
“We’re small-business owners looking to create an intimate and special experience,” Haier said. “We are completely committed to it.”
The plan brings with it great potential, generating public interest in and traffic on-site. That should help deter vandalism.

“Right now, we’re not doing anything down there, and because of that, it has become a play space for non-visitors,” Kessler said.

It also could create a sustaining source of revenue for the district, which I hope it will use to restore the barn and Tribune dormitory II.

“No other site has these layers upon layers of history,” MCCD planning department manager Amy Peters said at a recent meeting with the camp’s neighbors. “How do we celebrate that? How do we embrace it?”

Haier said she is not interested in using the last Tribune dormitory as part of the proposed glamping experience. It is too far away from the river. It sits on a foundation. But ModCamp is interested in purposing parts of the old camp – for tiny houses and luxury tents one day – where camp buildings once sat.

“We intend to work with the footprint there. The district has already saved pieces of significance that we want to turn into art and sculpture to put along the trails,” Haier said. “This [camp] is a really beautiful story that not a lot of people know about.”

Published March 5, 2018, in the Northwest Herald