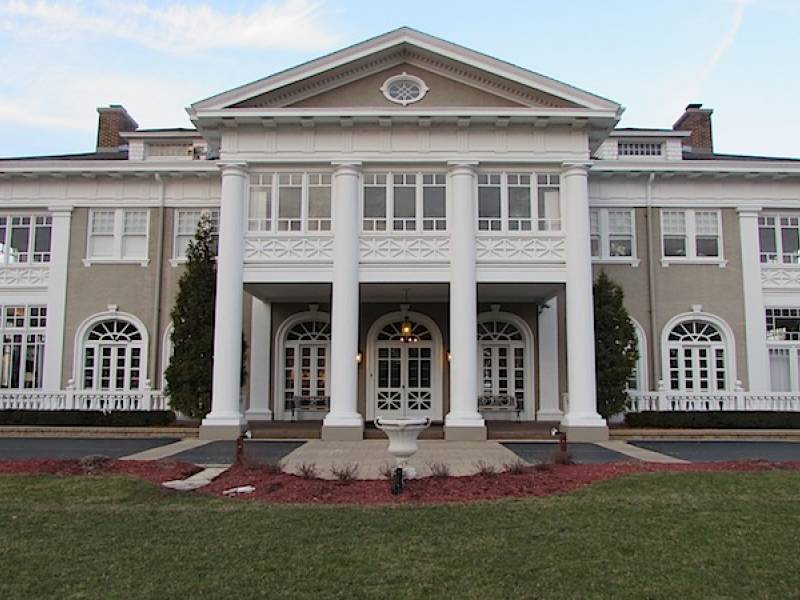 A group of McHenry County historians traveled into nearly Lake County March 22 to visit a vestige of the old "robber baron" era of American history. In addition to Marshall Fields and Montgomery Ward, the Lehmann family built a retailing empire on State Street in Chicago.

The E.J.  and Augusta Lehmann fortune was rooted in The Fair Store – an early discount department store, founded in 1874, which flourished on the corner of State and Adams streets in Chicago. Edward’s father, Ernst J. Lehmann, picked the name to reinforce that customers would be treated fairly. Goods were bought and sold goods on a cash-only basis. The family operated store until 1925, when it was sold to chain store magnate S. S. Kresge - of Kmart fame.

Located on  shore of Sun Lake, Edward John (son of Ernst Johann Lehmann, 1849-1900) and his second wife Florence and their three sons, built a summer home known as "The Cottage" at Longwood Farm in 1912, just north of his father's mansion (located at what is now One Hope United).

The second generation Lehmann home, now known as "The Mansion," combines several architectural styles, but is very much in the tradition of the Old South.  it was built in 1912 by Charlie and Frank Hamlin of Lake Villa and features a rather Black Forest motif featuring plenty of darkly stained oak, tongue-and-groove wood floors (in excellent shape because they were protected by carpet and rugs) and some stained glass. It originally boasted 10 bedrooms, nine porches, eight bathrooms, three living rooms, three kitchens, a dining room and a wine room on 1,100 acres facing Cedar Lake.

Edward John died Oct. 12, 1954, in his home in Chicago. His sole surviving son, Robert, became president of Lehmann Estates. After Florence died in 1964, the estate was purchased by a developer, but his proposed development was rejected by the village Lake Villa.

Sun Lake and 527 acres then were purchased in 1991 by the Lake County Forest Preserve. Centex Homes developed 350 acres and the remaining 60 acres and the deteriorating mansion were sold to village in July 2001 for $2.1 million.  Robert Frank, former caretaker of the estate for 19 years,  estimates the village sunk another $800,000 in repairs and upgrades to the home in order to accommodate weddings and other events.

A 2004 addition featured a kitchen, an elevator to the second floor and new restrooms. It also renovated the courtyard. However, the dining room, living room, original kitchen and upstairs bedrooms (with private porches) look much as they did.