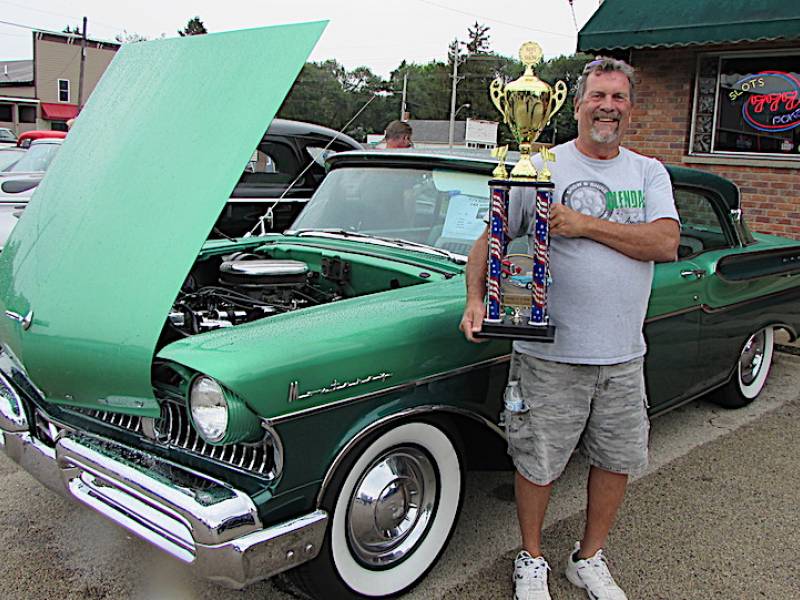 Rudy and Penny Stybnowski have been “scrounging up” accoutrements for their Model Ts at antique stores throughout the Midwest. Their inventory includes spark plugs, polish, tire repair kits and warning reflectors.

Machinist Gus Tipps of Walworth, Wis., presents the lighted People’s Choice trophy to Penny Stynowski of Hampshire for her 1924 Model T. It was among those entered in the July 11 Heritage Fair Car Show.

UNION – Rudy and Penny Stynowski of Hampshire were thrilled to win this year’s People’s Choice trophy for Penny’s 1924 Ford T-coupe. Rudy typically brings “his” 1919 touring car, as well, but it doesn’t have windows.

With a chance of rain in the forecast, he wasn’t going to risk it. But that doesn’t mean he hasn’t gone to great lengths on behalf of his hobby – traveling hundreds of miles at time in pursuit of antique tool kits, parts and the like.

Rudy bought the coupe nine years ago from a member of the Model T Ford Club International, which his father helped found in 1952. A retired mechanic, Rudy began working at the family’s automotive business – City Suburban Goodyear, which later moved from Chicago to Niles – in 1932.

“I was pretty much a Henry Ford follower. Model Ts were in my family,” said Rudy, 71. “The Model T, just in the United States, had 58 percent of the car market at one time. … Henry Ford wanted to make everything he could himself. Every time someone would come up with a good idea, he would adopt it.”

According to Ford Motor Co., more than 15,000,000 Model T’s were built and sold.
By the early 1920s more than half of the registered automobiles in the world were Fords. The Model T club has chapters in 20 countries.

Among the first mass-produced vehicles, the Model T was the first to have it engine block and the crankcase cast as a single unit. It boasted a removable cylinder head, a steering wheel on the left for improved access and a new alloy called vanadium steel. Both of the Stynowkis’ cars also use wood-framed superstructure.

“They are not a normal car – that’s for sure,” said Rudy, who noted the coupe still has its original engine.

The ninth annual Heritage Fair Car Show, hosted by the McHenry County Historical Society & Museum in Union, attracted about 60 vehicles – most in mint condition. But none were finer than John Sobieszczyk’s 1957 Mercury Marquis. Ironically, it was a 1959 Ford Galaxy 500 at the Volo Auto Museum that piqued interest in buying a classic car.

“Then we came across this Mercury – similar and half the price,” said the Hampshire resident. “It was a two-and-a-half-hour drive to Mukwonago, Wis., and it was hazy. Then the sun came out and hit that green. Whoa, it was nice!”

Sobieszczyk bought the two-tone Mercury four years ago as a hobby. He takes it to shows and cruise nights. And at this year’s Heritage Fair Car Show, hosted by MCHS and TJ’s Klassics, he brought something home: The Best of Show trophy.

“I’m not a gearhead. I’m not a mechanic. But I do a few things,” the retired AT&T employee said. “I have a buddy who has a couple of old cars. We drive them. We joined a car club and go to shows. People appreciate it. You see them smile, give a thumbs up out the window or beep their horn.”

Thanks to all the drivers who came out and supported the McHenry County Historical Society. Special thanks to Gus Tipps of Walworth, Wis., who handcrafted this year's People's Choice trophy; show organizer Tony Luscalzo of TJ's Klassics; DJ Jose Ramos and to our sponsors: Intren, Prairie Community Bank and O'Connor Electric. Thanks, as well, to all the businesses that donated door prizes. 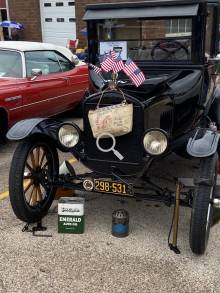