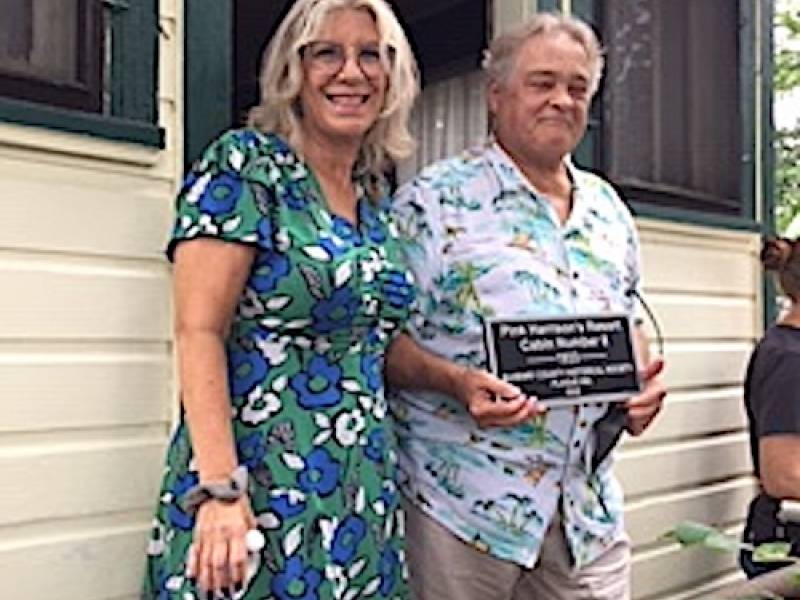 The Tim HarriSon family and the McHenry County Historical Society invite the general public to attend the plaquing ceremony of Cabin No. 8 at the former Pink Harrison’s Resort, 804 Harrison Lane in Johnsburg. The plaqing will be at 1 p.m. Saturday, July 16.

JOHNSBURG – The public is invited to join the McHenry County Historical Society for the plaquing of a unique structure: the restored Cabin No. 8 at Pink Harrison’s Resort on the shores of Pistakee Bay.

Chicago in the 1920s was a rapidly expanding, heavily congested, noisy and smelly place – especially during the hot Midwest summers. Just two hours north by train, there was a place to escape the busy city, a region of pristine beauty, fresh air, swimming and fishing, known as, the Chain-O-Lakes. It was here Anton and Mary Immekus bought a home which they, along with their five children, enjoyed every summer. Eventually their daughter, Christine, married Frank (Pink) HarriSon and together they bought the parents’ Pistakee Bay summer home.

In 1932 they purchased a parcel across the street, which came with all important water rights. It was a time of the Great Depression, so more than enough good affordable help was available and construction began immediately on the one- and two-bedroom cabins. One year later Frank and Christine began to rent their new cabins and Pink Harrison’s Resort opened.

There were hundreds of fishing cabins to rent along the Chain-O-Lakes, but few came equipped with such amenities as a sink with running water, linoleum flooring, a gas stove, electric lights, a comfortable bed, and a separate men’s and women’s bath house with flush toilets.  There was even linen-service, which consisted of one fresh towel and washcloth per day and fresh sheets once a week. There were fine flat bottom boats to rent, or one could fish off the pier.

This parcel was referred to as “The Cabin Lot” and eventually consisted of 13 cabins and a bath house. These cabins were numbered according to their sequence of construction.

In December of 1933 Prohibition ended, it was now time to convert the home to a restaurant, the garage into a bar and build a dance hall. All, but the dance hall, are still standing today – directly across the street.

As time went on, Pink and Christine purchased one parcel after another until they had nearly 5 acres. In the 1940s they moved the dance hall closer to the water’s edge, made it a dining room, built a new kitchen and a tavern, with a 28-foot bar.  By the 1950s, the resort – often referred to as “The Playground of Pistakee Bay” – consisted of 25 buildings, dozens of rental boats, nearly 300 feet of pier, boat slips, and marine gasoline service. All run with the help of their sons, Herbert and Thomas, and eventually their wives, Paula and Marilyn.

Pink died in 1953, followed by Christine in 1957. Bert went on to become a real estate appraiser. Tom took over the resort, along with the name Pink, or Pinky. Tom, Marylin, and their six children, all pitched in to run the family resort.

Tom passed away in July 2000, followed by Marylin in 2003. On Dec. 1, 2003, exactly 70 years after it opened, Pink Harrison’s Resort closed its doors and demolition began shortly thereafter … except for a few original cabins saved by the Tim HarriSon family.

The hundreds of fishing cabins dotting the Chain O’ Lakes are now long gone making this nondescript little fishing cabin not only a rarity, but a testament to another time. Folks would arrive at their Chain-O-Lakes getaway by steam engine, then hire a water taxi. Mail also arrived by boat. In addition to swimming, visitors would enjoy boat tours of Egyptian lotus flower beds and catch their limit of panfish. And when you got home? You could tell everyone, you’ve gone fish’n’ at Pinky’s!

So where did this name Pink come from? No one knows for sure, but one of the tales tells of a newborn named Frank HarriSon who arrived with the pinkest little face. They called him “Pink.”


• Patrick King is a member of the McHenry County Historical Society’s Historic Sites Committee. MCHS invites people with architectural and/or historically significant buildings, homes, businesses, or farms, to apply for a plaque. Call (815) 923-2267 or visit GotHistory.org. Like us on Facebook www.facebook.com/pages/McHenry-County-Historical-Society/109520782418180 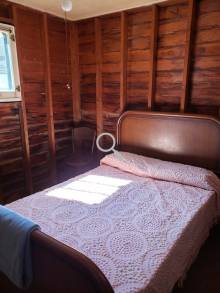