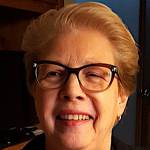 Harry and I have been married for 53 years and have two adult children. The children have grown up knowing their dad was a vegetable farmer and their mother was involved in community events, such as Milk Day, and clubs, such as Business & Professional Women while working as a cosmetologist for 28 years.

Harry’s family moved from Palatine in 1956. My parents, Mr & Mrs. Richard F. Kenny, lived in Mount Prospect. I was in the second graduating class (1962) from Prospect High School.

After the kids got their driver’s licenses, I changed careers. Starting in 1987, I attended McHenry County College graduating with an associate’s degree in science and by 1995 received a bachelor’s degree with an emphasis in psychology. From that point on, my career was in alcohol, drug and violence prevention until 2009, when I retired for the Winnebago County Health Department in Rockford. As WCHD’s director of the Violence Prevention Collaborative, I received several awards.

I believe all my work careers helped people. Cosmetology helped women feel better about who they are, and it allowed me to be home or close to home as my children grew. A physical issue forced me to look for a less physical type of career. With an interest in what makes people do what they do, it seemed to me like a natural progression to earn a degree in psychology.

This interest has led me to what to serve on the historical society board. We have been Society members since early 2000 and attended events before coming members. We have always been interested in history and our respective family histories. I have been on Ancestry.com for quite some time tracing my family histories (Irish and Italian). Harry’s family is 100 percent German. His family has been farming since 1193 in Kirchverwen, Germany and since the late 1800s in Illinois.

A need to know what brings people to McHenry County, whether it was in 1800s, today or somewhere in-between. I want to help others to deepen their love of McHenry County history and learn more about their own history.

In 2009, I was elected Dunham Township Assessor. While I loved doing that, I will retire on Dec. 31, 2021. So my next adventure is yet to be determined.  It will be an exciting time for me as I figure out what the future will bring next.