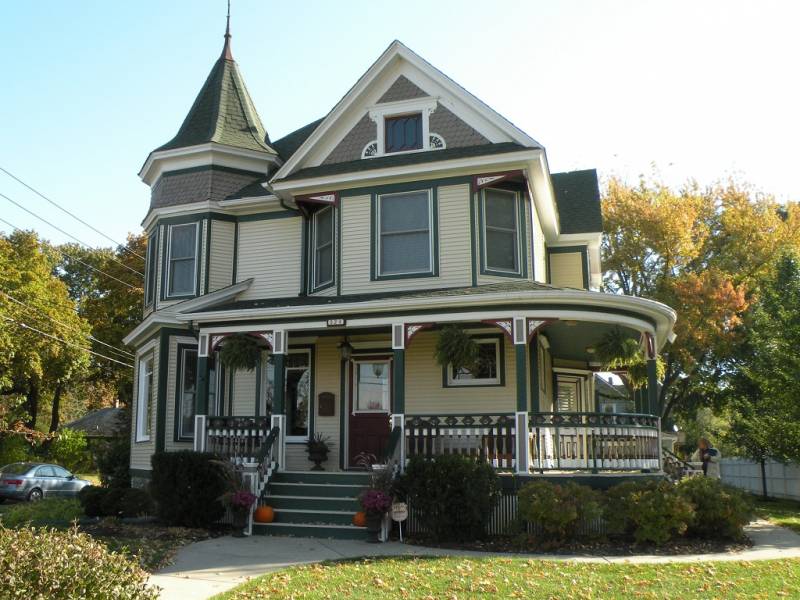 The McHenry County Historical Society on Saturday, May 3, plaqued the 113-year-old George Burger house  at 524 Clay St. in Woodstock.

The present owners, Peter and Karen Bucchianeri, who have taken the utmost care in preserving and restoring this fine residence, will be awarded the plaque in a public ceremony at the house, located at 524 Clay St.

The year was 1901, Butch Cassidy and the Sundance Kid were still robbing trains out west and Marconi amazed the world by sending the first wireless telegraph message clear across the mighty Atlantic. Closer to home; McHenry County was producing 200,000 tons of milk annually and was proclaimed “the Center of the Dairy Region of the World!” That same year some boys west of Woodstock sold 193 acres for a mere $20.72 an acre. In town, folks along the dusty streets of Woodstock hastened to their windows to see stylish Doc Windmueler commanding his Haines Steam Mobile as it sped hesitatingly along the unpaved streets of Woodstock. And over on Clay Street the Woodstock Sentinel made a glass negative photo of Woodstock’s newest addition, the George Burger residence.

This picturesque Queen Anne style home typifies middle America’s residential architecture at the turn of the 20th century. This home contains all the key elements of a true American style Queen Anne residence, such as the dominant wood shingled, ornamentally trimmed front gable, which cantilevers over an elegant wrap around porch. This porch covers a well-preserved wood and beveled glass primary entrance door, flanked by a cast iron mail box, and an original side, or funeral, entrance.

The window hood moldings, soffits, and fascia, are original elements to the home. Also, facing the corner of Clay and North streets is an unusual square bay, and octagon turret combination.

The interior of this home boast high ceilings and a beautiful oak staircase and balustrade, including box newels with hand carved leaf motifs. There is also a large built-in foyer boot bench, pocket doors, and decorative leaded and stained glass windows. On the second floor are the original wide plank pine floors, several original doors, with original hardware, and a set of rather rare large folding doors.

In its long history, the George Burger house has had several owners and was only recently brought back to its present grandeur, after somewhat destructive days as a multi-family dwelling.

George Burger was born 1860, in Volo. He was a Woodstock coal merchant located in the Bagley Warehouse on Jefferson Street. He handled several brands of this all important commodity, and even boasted “free delivery.” After his third year of selling coal he hired a local firm, Schneider & Clark, for the construction of his Clay Street home. He went on to marry Linda Eckert, born in 1859, from the prominent Henry Eckert farm on Queen Ann prairie. They had two children, Nettie and Irwin.

Burger began serving on the Woodstock Board of Education in 1899 and in 1904 became alderman of Woodstock’s North Ward.

Winston Churchill said “First we shape our buildings; thereafter they shape us." This is very true, especially here in McHenry County. Unfortunately very few of us know the historical background of the buildings around us, the buildings that shape us, such as the George Burger house. Your McHenry County Historical Society is working to change that. 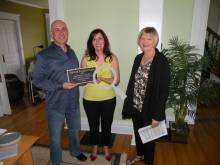