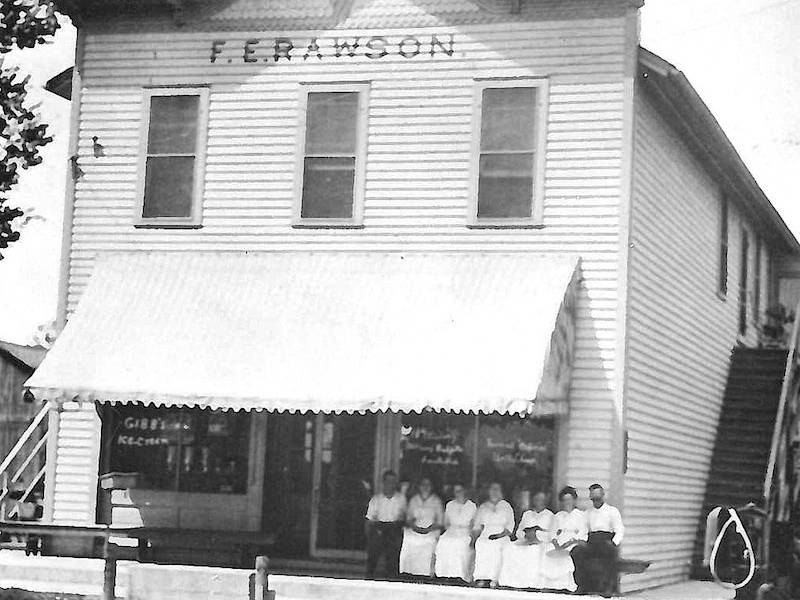 F.E. Rawson general store is seen in Greenwood. Frank Rawson and his wife, Viola, are seated on the far left.

The opening of Dollar General stores recently in Harvard and Hebron, and Wonder Lake before that, underscores the company’s commitment to small-town America and harkens back to a time when general stores dotted the landscape.

The Tennessee-based chain now operates stores across the area – including Woodstock, Cary, McHenry, Marengo, Fox Lake and Carpentersville – providing a place where you can buy everything from shower curtains to toilet paper, aspirin to a dozen eggs.

“[Dollar General’s typical shopper] doesn’t look at her pantry or her refrigerator and say, ‘You know, I’m going to be out of ketchup in the next few days. I’m going to order a few bottles.’ The core customer uses the last bit of ketchup at the table the night prior, and either on her way to work or on her way home picks up one bottle.”

“With its convenient locations for frugal shoppers, it has become one of the most profitable retailers in the U.S. and a lifeline for lower-income customers bypassed by other major chains,” Nassauer wrote. “Dollar General Corp.’s 14,000 stores yielded more than double the profit of Macy’s Inc. on less revenue during its most recent fiscal year. And its $22 billion market value eclipses the largest U.S. grocery chain, Kroger Co., which has five times the revenue.”

Dollar General, founded in 1968, anticipates opening about 900 new stores next year, plus it hopes to remodel 1,000 others.

At a budget-conscious $250,000 price tag for a new store, it is understandable why executives boast that three-quarters of all Americans will live within 5 miles of a Dollar General by the end of 2018.

But this throwback concept of putting small stores within easy reach of rural residents is nothing new. Walmart used that approach successfully in places such as Harvard. And, of course, not that long ago, general stores thrived in small communities isolated by bad roads and viable modes of transportation.

In 1895, kerosene sold for 8 cents a gallon. You could guy a 5-pound bag of rice for a quarter and 23 pounds of crackers for a buck, according to the “Greenwood Book,” written in 2004 by Libbie Aavang and Norine Mathey.

When Frank E. Rawson bought the store in 1908, he began serving ice cream starting at 5 p.m. every Saturday. Every Thursday, Bernice Dailey, a milliner from Hebron, brought hats. It was about giving people what they want when they want it – be it aspirin, laundry detergent or a pack of smokes.

“We try to have a little bit of everything you may run out of,” Greenwood General Store employee Denise Mercuri said. “We also have stuff on consignment that local artisans have made.”

My mother-in-law grew up working in a general store owned by her family in tiny Sedan, Minnesota. Pearl Willhammer recalled that as a 9-year-old she met the “egg man” every morning at 6:30 a.m. and didn’t stop working until 6 p.m.

Just like the barrel of Lutefisk (dried whitefish treated with lye) placed outside the front door every Christmas, customers could count on Willhammer behind the counter throughout the 1930s.

“We had everything,” she said. “Overshoes for men, groceries, dry goods, penny candy, personal-care products with naphtha soap on the bottom shelf, boric acid, two big barrels containing kerosene and vinegar, and we sold 50- and 100-pound sacks of flour, as well as salt in blocks.”

She recalled a coal-burning stove in the center of the store, where the men used to sit on gunnysacks cracking nuts and cracking wise.

The Greenwood General Store also has its version of a kibitz corner it calls the “table of knowledge,” Mercuri said. “We have a group of guys who talk about everything and anything.”

Willhammer said farmers used to bring in eggs and poultry, which they would trade for items in the store. In addition to an egg man, there was a bread man, a cookie man and all sorts of salesmen pushing their wares in her family’s red and white store.

Like IGA today, the company did centralized buying and distribution for small stores, allowing them to better compete against the big boys.

“I loved working at the store. They made a big thing out of me,” Willhammer said with a laugh. “I got a uniform they made special for me. I also liked interacting with the customers.”

The only thing she could do without were the banana spiders, which sometimes would hitch a ride in crates of bananas.

“They were big, hairy creatures,” she said.

No sooner did we launch our latest Adopt An Artifact program than you responded. Before the ink had dried on the news release, the public stepped up to save pieces of our past – adopting a 1912 wedding hat belonging to Lillian Keating Donovan of Harvard, a Civil War diary, a 94-year-old train station bench and an 1862 McHenry County sheet map.

Thank you, McHenry County. We were overwhelmed by your generosity! If you missed out on these items, fear not.

Other items still available include an 1840s shirtwaist (adopt for $50), an 1895 Victorian parlor settee (adopt for $225) and a Bible presented to the Franklinville Methodist Church in 1890 (adopt for $700). Your tax-deductible donation will support the restoration and storage of these artifacts and preserve their historical significance.

For information about any of these artifacts or how you can adopt an item, call 815-923-2267 or visit www.gothistory.org. Adopt An Artifact is listed under the “Museum” tab.