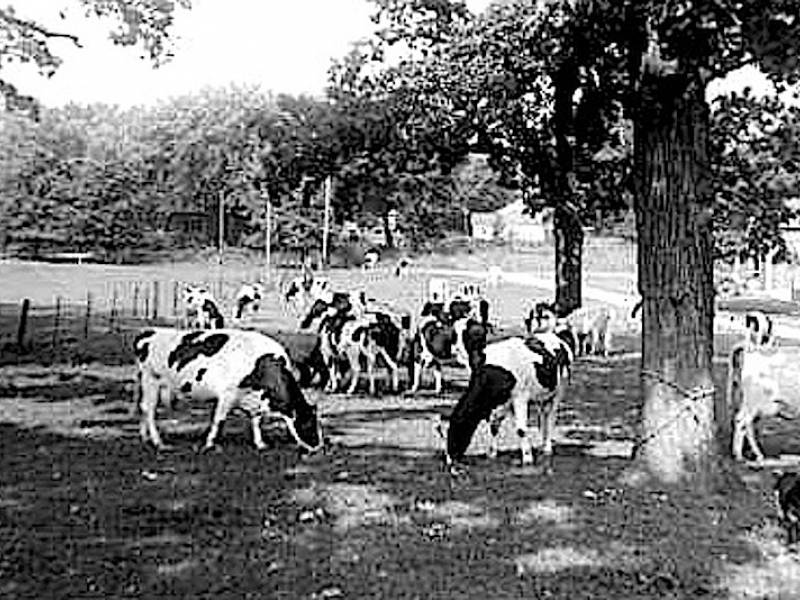 A September 1912 edition of the Wilmot, Wisconsin, Agitator put the dairy dilemma this way:

“The announcement of the fall and winter milk prices of the large handlers in the Elgin territory at an average of $1.70 per hundred [weight] for the six months dating Oct. 1 seems to be very unsatisfactory to a large number of the producers, and while they very generally signed for the usual amounts, claim there can be no money in the business at prevailing prices. …

“We heard of one poor farmer who took the news so hard that he put out 40 more cows, we suppose on the theory that if you are going bankrupt, better hurry up and get the dirty job over with.”

A century later, things haven’t changed all that much.

Mike Hutjens, a former dairy farmer and a retired dairy extension specialist with the University of Illinois, said dairymen now are receiving about $15 a 100 weight – the equivalent of $1.25 per gallon – to produce the milk and get it on the truck. They need $1.50 a gallon … just to break even, he said.

“What is happening every day in Wisconsin is that dairy farms are getting out,” Hutjens said. “It’s losing 500 dairy farms a year.”

Illinois has less than 100,000 dairy farms across the state and the total continues to shrink. Joel and Linnea Kooistra sold their herd of 280 cows in April, further depleting a McHenry County total of 3,000 dairy cows in January. By means of comparison, there were 85,000 dairy cows here in 1931 and 47,600 cows in 1941.

Linnea Kooistra said Walmart’s new 250,000-square-foot milk processing plant in Fort Wayne, Indiana, and trade war between the U.S. and potential overseas markets has not helped. She said 15 percent of milk products are exported to Canada in the form of milk powder and whey.

“The only thing you can do is put more cows in the barn and build bigger,” she said. “The niche market is filled up. There won’t be a niche market.”

Hutjens agreed that segments such as cheese, yogurt and grass-fed organic milk already are highly competitive. Couple that with shrinking milk consumption and a surplus of suppliers, and no wonder Dean Foods announced that it would shutter its Huntley production plant in the fall. The plant, built in 1945, is one of seven nationwide targeted by the Texas company for closure.

When Dean Foods’ largest customer cut ties, it prompted the company in May to end contracts with more than 100 farmers in eight states. Dean’s latest annual report to stockholders noted Walmart and its subsidiaries accounted for 17.5 percent of sales in 2017.

The report went on to state: “In connection with Walmart Inc.’s dairy processing plant in Indiana, we expect to lose approximately 60 million gallons of private label fluid milk volume beginning in the second half of 2018, which equates to approximately 100 [million] to 110 million gallons annually. In addition, we expect marketplace volume and mix challenges to continue in 2018. …”

Hutjens said in order to combat oversupply, one in six semi loads of milk need to leave the country. Mexico is America’s top cheese importer and Canada isn’t far behind. But new tariffs are disrupting trade. Another possible option for small dairy farmers is to get larger – either through a cooperative or, ideally, on their own.

“I think the future is being able to hook up to a single farm every other day,” Hutjens said. “It would mean huge savings for a farmer if he could fill it [tanker].”

While one-stop shopping limits truck trips and better guarantees product consistency, Hutjens he estimated that would require a minimum herd of 500 to 600 cows. The average size herd in Illinois right now is 149 cows.

“The problem is, you still need a buyer. I see huge challenges there,” he said. “They [farmers] are in no-man’s land, so to speak. They can coast out, stay around another five years, but there are no new customers and now you have [maximum production] quotas. If you are an average Illinois dairy farmer, you are at a highly risky point. … In Wisconsin and Illinois the small guy is getting squeezed out.”

After extensive damage to Long Grove’s historic covered bridge June 27 by an irresponsible truck driver, indications are that a quick fix is unlikely.

Long Grove Historical Society President Angie Underwood said three separate insurance companies and a potential lawsuit by downtown merchants over loss of business likely would take months to sort out. And that does not include the time and money needed for inspections and repairs required before the single-lane, Buffalo Creek bridge could reopen to traffic.

“It needs a full assessment of the limestone abutments and the metal understructure,” Underwood said. “But we were looking at major repairs in 10 years time. Those repairs that could have happened but were put off have kind of been put back on the burner now. Perhaps we can make lemonade out of lemons.”

The Pratt-truss bridge, built by the Joliet Bridge and Iron Co. in 1906, was added to the National Register of Historic Places only two weeks before the crash.

We realize that many of you work during the week and are unable to visit the McHenry County Historical Museum. With that in mind, MCHS is experimenting with Saturday hours. The museum will be open from 1 to 4 p.m. the second Saturdays of August, September and October. We also are optimistic that the addition a fourth, full-time staffer will enable us to extend the museum season through October.

August will feature a quilt appraisal by American Quilt Society certified appraiser Sandy Schweitzer. A donation of $30 to the historical society is requested for each 15-minute verbal appraisal and there are 12 slots available on a first-come, first-served basis. Pre-payment by check or credit card is required, with all proceeds benefiting the society. Call 815-923-2267 to reserve your spot.

Join the McHenry County Historical Society at 7 p.m. Monday for its annual meeting featuring a free presentation by Michael Rehberg on “Sordid and Scandalous Lake Geneva.” Get the dish on a 1950s bank robbery, the town’s tie to Prohibition gangsters and tales of the Geneva Lake sea serpent. The free presentation follows a short business meeting for MCHS members and precedes a mini ice cream social. For information visit www.gothistory.org.