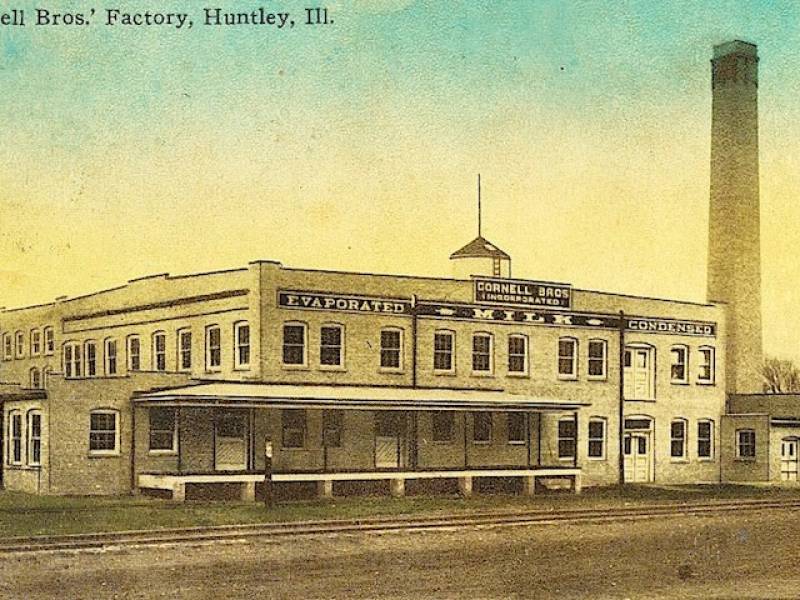 The former H.D. Catty Corp. building at 11117 S. Church St., built about the turn of the century, is among the oldest buildings in Huntley. But its future remains very much in doubt, as the village weighs development proposals that could involve leveling the entire 33,100-square-foot structure.

Over the years, the building housed dairy and brewing businesses. The Cornell Brothers Creamery opened in 1908 and operated until the 1910s, when a cash shortage spurred the plant’s sale to John F. Jelke in 1912. The John F. Jelke Co. – home of the popular “Good Luck” margarine – would become Huntley’s largest dairy until the construction of Dean’s in 1946, local historian Jake Marino said.

To accommodate the growing business, a two-story expansion was added to the north, as well as an addition to the south. Because of a declining market stemming from higher milk prices, the plant closed in 1930, and it sat empty until 1933. After the repeal of Prohibition, bootlegger George Druggan and his uncle, Edward Riggs, bought the factory and converted it into a brewery that boasted top-notch equipment, which enabled it to produce 125 barrels of beer a day with the possibility of upgrading production up to 500 barrels. Its signature product was Huntley Maid Beer.

However, questionable business practices led to the company’s bankruptcy only one year after opening. About a year later, most of the company had been liquidated.

It reopened under new management as the Huntley Brewing Co. in August 1936 and began producing “Bel” Boy and Copperhead brand beers. That, too, lasted no more than a couple of years.

The H.D. Catty Corp., a cellophane and aluminum foil packager, eventually built a new plant in unincorporated Harvard and relocated in 2006. The village of Huntley bought the abandoned plant from Catty Corp. in February 2017 for $435,690. Even though the building’s exterior requires immediate repairs, it recently was appraised at $690,000. It currently is zoned for manufacturing.

The village received no formal responses to its RFP by the deadline. It is continuing to market the property and to speak with those who have expressed interest and those who still may come forward.

Political experience used to be a prerequisite before folks sought higher office. Not anymore. The races for the U.S. House are chock-full of candidates new to politics and the nuances of legislating.

Although such “outsiders” can bring a fresh perspective, there are legitimate fears that naiveté can prove disastrous … and expensive.

Tracy Sulkin, interim associate dean and professor of political science at the University of Illinois in Champaign, said part of our ambiguity about whether experience is warranted stems from our own perceptions about what a legislator should be.

Sulkin said that newcomers traditionally have filled 10 percent to 15 percent of congressional ranks.

“There has always been a sizable number of amateurs,” she said, “but it is entirely possible there are periods that draw more candidates out.”

The question is: Do voters care? Do they have an understanding of the political process and the requirements needed for offices for which they are electing people to serve?

In a 2016 New York Times article, Fredrik Logevall and Kenneth Osgood warned that political science was being “marginalized,” even ignored.

“Many college catalogs list precious few specialized courses on the subject, and survey courses often give scant attention to political topics,” the article read. “The pipelines for new Ph.D.s in the subject, and therefore, new faculty, are drying up, and in many graduate programs, one can earn a doctorate in American history with little exposure to politics.

“Knowledge of our political past is important because it can serve as an antidote to the misuse of history by our leaders and save us from being bamboozled by analogies, by the easy ‘lessons of the past.’ It can make us less egocentric by showing us how other politicians and governments in other times have responded to division and challenge. And it can help us better understand the likely effects of our actions, a vital step in the acquisition of insight and maturity.”

Back in the Dark Ages of my youth, WLUP-FM 97.9 was the quintessential station for rock ’n’ roll in Chicagoland. It was a welcome alternative to the repetitive playlists of WCFL and WLS. It was the bad boy on your radio dial – from Disco Demolition Night to sexy Loop girls to the outrageous antics of DJs Jonathon Brandmeier, Steve Dahl and Garry Meier.

Consequently, its conversion into an adult, contemporary Christian music station for $21.5 million “pieces of silver,” is hard to fathom for many listeners. Such is the topsy-turvy world of major-market radio.

The Chicago Tribune reported that “over-the-air radio revenue peaked at about $18 billion in 2006, but it fell precipitously during the Great Recession and has never really recovered.” Larry S. Miller, director of the Steinhardt Music Business Program at New York University, noted in a report released last summer:

“Music discovery as a whole is moving away from AM/FM radio and toward YouTube, Spotify and Pandora – especially among younger listeners,” the report said. “According to data from Edison Research and Triton Digital’s ‘Infinite Dial 2017’ webinar, AM/FM radio remained a top source for keeping up to date with music with 19 percent of all respondents citing it, second only to friends/family with 22 percent. However, this was a dramatic decline from the previous year, when 28 percent cited AM/FM radio.”

Launched in 1977, the 50,000-watt WLUP scored its highest ratings in the summer of 1979, with a 7.3 share – third among all stations. In recent years, the Loop ratings slumped amid several ownership changes.

Join the McHenry County Historical Society at 7 p.m. Monday for the second in its four-part Sampler Lecture Series at the county historical museum, 6422 Main St. in Union. Author Rochelle Pennington will discuss little-known details about the sinking of the famed freighter, the Edmund Fitzgerald. For details, visit www.gothistory.org.

• Kurt Begalka is administrator of the McHenry County Historical Society. He can be reached at kurt@mchenrycountyhistory.org.