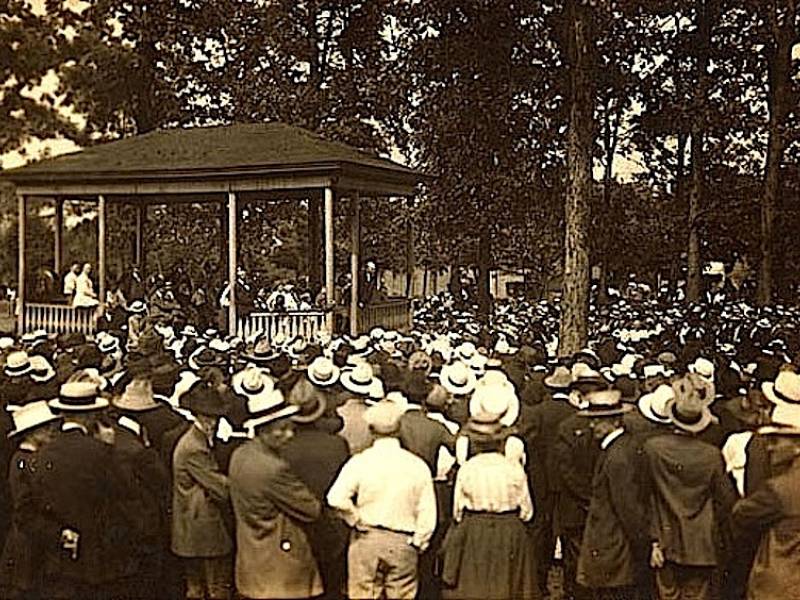 Eugene V. Debs speaks to a crowd in Canton, OH, on June 16, 1918 . Photo courtesy of the National Archives and Records Administration

I was a young kid when the University of Texas tower shooting occurred, but I remember it was all over the news.

Nothing that horrific had ever happened before.

Shortly before noon Aug. 1, 1966, Charles Whitman, an architectural engineering student and Marine-trained sniper, climbed atop the observation deck of a 300-foot clock tower at the University of Texas in Austin. During the next 96 minutes, he shot and killed 14 people and injured 31 others; some from as far away as 500 feet. A 15th victim died in 2001 from the injuries he suffered that day.

This massacre, using many of the same type of high-powered weaponry used by killer Stephen Paddock on Oct. 1, remained the deadliest shooting by a single gunman until the Virginia Tech shooting in 2007. That resulted in the deaths of 32 people and wounding of 17 more.

Now the Texas university shooting doesn’t even rank among the top five deadliest shootings in this country. The dubious list is led by the Mandalay Bay Resort shootings last week, in which 58 died and more than 500 were wounded. Also on the list are: the Pulse nightclub in Orlando, Florida, (June 12, 2016); the aforementioned Virginia Tech shootings in Blacksburg; Sandy Hook Elementary School in Newton, Connecticut, (Dec. 14, 2012); Luby’s Cafeteria in Killeen, Texas, (Oct. 16, 1991); and the McDonald’s restaurant in San Ysidro, California, (July 18, 1984).

Police recovered 23 firearms in Paddock’s Las Vegas hotel room and 19 more at one of the two houses he owns. Among them was the semi-automatic AR-15 – among a dozen rifles the killer had modified with “bump stocks” – a devise that captures the gun’s recoil energy to “bump” the trigger into the finger. Although the gun technically remains a semi-automatic, it allows a shooter to fire with deadly speed.

Gun experts say this modification, also known as a slide-fire stock, may mimic the action of a rapid-fire rifle. However, it decreases accuracy. That’s a deal breaker, unless, of course, you’ve got a huge target.

Weapons such as machine guns, which fire continuously with a single trigger pull, have been effectively banned since 1986. Even the expiration in 2004 of the 10-year-old assault weapons’ ban did little to reframe that debate. But the rise in mass shootings and concerns about the easy availability of military-style weaponry has increased the drumbeat for stronger gun regulations.

Sen. Dianne Feinstein, D-Calif., introduced a bill on Wednesday that would outlaw bump stocks. The Associated Press reported that up to 10 million AR-15s – one of the weapons banned under a Maryland law upheld by the 4th U.S. Circuit Court of Appeals in Richmond, Virginia, earlier this year – are registered in this country.

According to news accounts, Paddock’s gun purchases date back more than 20 years. However, he bought more than 30 of the firearms in the past 12 months. Why no red flag? Although federal law requires gun stores to report multiple handgun purchases to the Bureau of Alcohol, Tobacco, Firearms and Explosives, that requirement does not apply to rifles. And the handgun requirement only occurs if the sales are made at the same time or within five consecutive business days of each other.

History tells us that doing nothing will result in another mass shooting. Will we learn from the past?

These cases regarding constitutional liberties, which the court ruled on in 1895 and 1919, continue to reverberate today. The first Supreme Court decision resulted in Debs serving time in the McHenry County Jail in Woodstock. The second, after Debs’ conviction for violating the 1917 Espionage Act, greatly affected the public’s right to free speech – even during wartime.

The agenda includes speakers from sponsoring organizations – Woodstock Celebrates Inc., the Illinois Labor History Society and the McHenry County Federation of Teachers – as well as representatives from the Illinois State Historical Society and the Debs Foundation in Terre Haute, Indiana.

Freeberg will present the free program from 2 to 3:30 p.m. Oct. 21, at the Woodstock Public Library, 414 W. Judd St. The lecture, sponsored by Woodstock Celebrates, is being offered in celebration of a new marker.

I wonder how Debs, a man of forethought who did not shrink from big issues, would have reacted to this nation’s spike in violence? A manifesto he wrote in January 1895 while in the Woodstock jail offers a clue.

“Questions of great and grave importance are up for decision. Great principles involving the liberty of the citizen are at stake. Out of all this, good will come.”

The McHenry County Historical Society presents a new edition of its popular Historic Halloween from 7 to 9 p.m. Wednesday at the museum, 6422 Main St., Union. For information, visit www.gothistory.org.