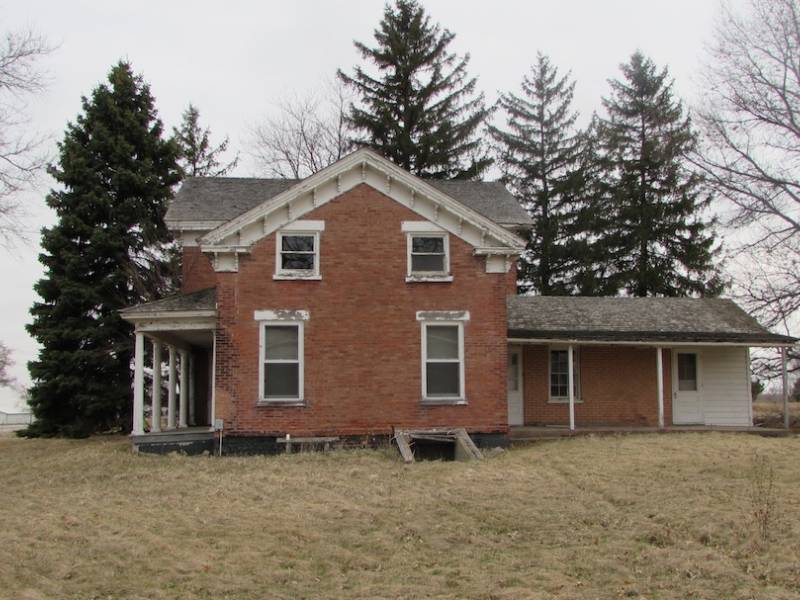 Since the McHenry County Board voted, 15-5, in May 2016 to give landmark status to the William H. Coventry House and Barn, we’ve learned only one thing: Structural conditions at the historic Harvard farmstead are much worse than preservationists feared.

A long-anticipated inspection of the site by the McHenry County Department of Planning and Development on June 27 discovered broken or missing windows, debris, water damage from at least two holes in the roof, a failing masonry wall, stress fractures in the foundation, failing ceiling joists and beams, invasive vegetation inside and outside the building, and damaged or missing wood flooring.

“In addition to displacing the plumbing fixtures, the walls, ceilings and even floors have been opened in an effort to strip the supply lines, and much of the cast-iron waste lines have been removed,” McHenry County building enforcement officer Adam Wallen wrote.

By any measure, the building is on death row. That prompted the county’s Historic Preservation Commission to pass a resolution last month urging the full County Board to take action. Among other things, it states:

“The Department of Planning and Development inspected the property, and the building enforcement officer issued a report with the opinion that the building is hazardous and unsafe as defined by the International Building Code … identifying five repairs that require immediate action and several additional repairs that are either urgent or recommended to restore the building to a safe condition and prevent further deterioration.”

The resolution, if passed by the County Board, would set in motion a “written notification of the violation” and would give the owner 30 days to fix the most serious problems or “provide an acceptable schedule for correcting the violation.”

The deteriorating structure dates back to 1855, at which time Capt. William H. Coventry and his wife, Maria Van Hosen, bought the property and built the home. In 1940, the house and barn were given the Henry Horner award for “Most Beautiful Farm.” The farm was plaqued by the McHenry County Historical Society’s Historic Sites Committee in 1989 because of its historic value.

The house and its outbuildings were bought in 1994 by Motorola, which built a 1.5-million-square-foot cellular telephone manufacturing and distribution facility on a site encompassing the historic structures. However, when Motorola abruptly shuttered its Harvard facility in 2003, the Coventry farm’s future became more unclear.

A series of absentee landlords assumed control of the property, the latest being a Chinese real estate firm doing business as Edward Harvard Holdings LLC. Meanwhile, the house and barn have continued to deteriorate – so much so that Landmarks Illinois added it to its 10 Most Endangered List in 2015.

There clearly is no sense of urgency at the county level. Without the inclusion of the aforementioned report in their packets, and with Harvard Economic Development Corp. Executive Director Charlie Eldredge advocating for an indefinite postponement, the county’s Planning, Environment and Development Committee voted Tuesday morning to delay further consideration of the resolution until October.

That means the building will continue to sit idle, continue to deteriorate and continue to face demolition by the neglect. It appears increasingly clear that the city of Harvard will have to take off the gloves should this unique building and accompanying barn avoid the wrecking ball and – just perhaps – fulfill its promise as a gateway showplace operated by the Harvard Historical Society.

And what of the county’s historic preservation ordinance? At least for the present, it remains nothing more than a paper dragon.