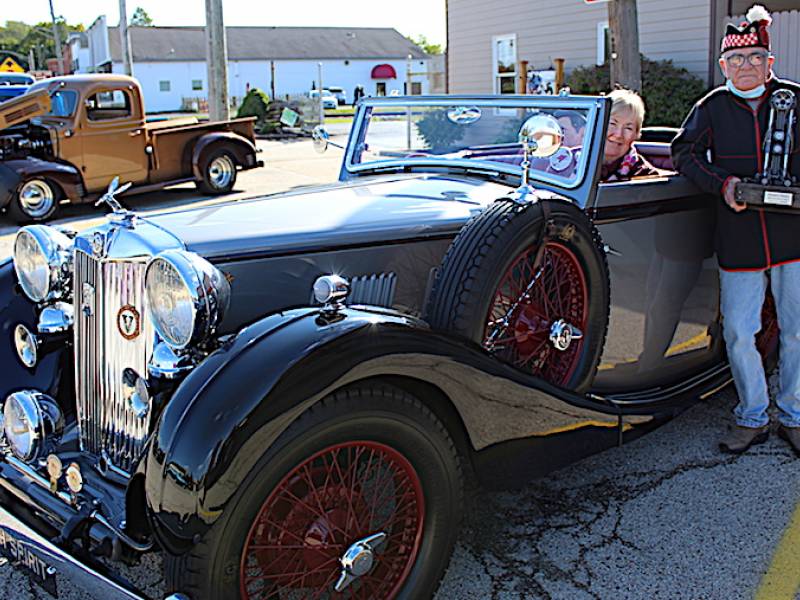 COVID-19 may have succeeded in putting the McHenry County Historical Society’s car show in “neutral,” but it never slipped into “park.”

About 80 vehicles registered for the show, delayed since July thanks to COVID-19. It featured demonstrations of flintknapping by Richard Hamilton and broom making by Bob McCann, as well as cider pressing, a selfie station and mum sale.

Bob Hanselman, of Woodstock, fell in love with MGs years ago when he owned Antique Auto Center in Elk Grove Village. A former research chemist, he ran the shop or 25 years – first selling parts, then maintenance, then full restorations.

“I have a ’51 MG TD [roadster], one of the little two-seaters that were popular in the late ’40s and early ’50s,” Hanselman said. “But I had a desire for an earlier MG.” After pestering a friend in Rolling Meadows for years, a 1938 Model VA Tickford became available. It boasts a full tool kit, a gold-plated instrument panel, a hydraulic jack system, crank windows and a Philco radio.

“It was made during a period of time when MG was trying to build bigger luxury cars to compete against Jaguar and Bentley,” Hanselman said. “You’d buy a chassis and they’d send it to a custom coach builder, which started out with horse-drawn carriages. Tickford is the particular body style made by Salmons & Sons. It’s called a “drophead coupe” because the top was called the “head” and the top goes down.”

“I had to have something different,” Hanselman said with a chuckle. “I couldn’t have a common MG.”

The Best of Show winner, Marengoan Dave Antonson, also knows his way around cars. Fortunately, he happened to be in the right place at the right time when his neighbor, who “changes cars like socks,” decided to sell his 1965 Chevy C10 pickup.

“It is the same model my grandfather had when I was little kid,” said Antonson, who recalled riding in the back across hayfields near Spooner, Wis. “I jumped on it.”

The truck, which originally came from North Carolina, boasts a sound frame, overdrive and power windows. Antonson, an auto mechanic for 35 years, has the mechanical end covered. A new metallic red paint job was just the thing to make it pop.

“You spend enough to keep yourself poor and happy,” he said.