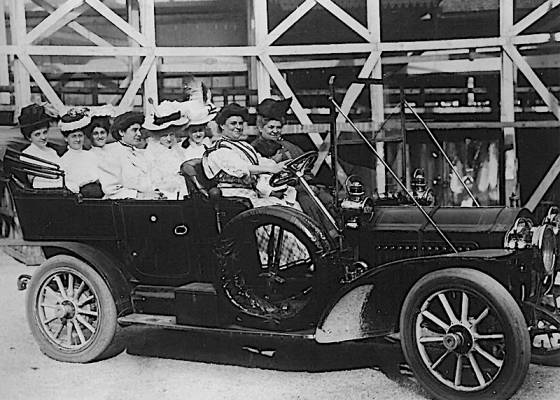 Following a brief business meeting and presentation of our Nancy Fike Scholarship, the McHenry County Historical Society welcomes speaker Kay Shelton Kozak, the longest-serving president of the Lincoln Highway Association and former president League of Women Voters of DeKalb County. She will present “The Women’s Suffrage Movement and the Good Roads Movement in Illinois.” Illinois was a national leader in both the Good Roads and the women’s suffrage movements, and the first state to have its segment of the Lincoln Highway paved in its entirety. Furthermore, the League of Women Voters was founded in Chicago in 1920.  This free presentation, at the county history museum in Union, will link those firsts in Illinois history. The business meeting starts at 6:30 p.m.. The program will get under way about 7 p.m., followed by ice cream.

At first glace, better roads and Women’s Suffrage would seem to have nothing to do with each other.

But to fully appreciate their connection, people need to walk a mile in these ladies’ shoes – literally and figuratively.

Kay Shelton Kozak, an instructor of anthropology at Kishwaukee College, will present “The Women’s Suffrage Movement and Good Roads Movement in Illinois” at 7 p.m. Monday, Aug. 19, at the McHenry County Historical Museum, 6422 Main St. in Union. The free program will be preceded by Society’s annual meeting and Nancy Fike Scholarship presentation at 6:30 p.m., and followed by refreshments.

Members and nonmembers, alike, are welcome to attend.

Before the Civil War, Kozak said, Americans were conflicted about giving women the right to vote. Emancipation temporarily trumped suffrage, she said … until women started getting out of the house and into the community. Many women even drove automobiles in order to participate in the 1913 Women’s Suffrage Parade in Washington, D.C.

“Women were driving cars and a lot of motor car companies saw this as a good way to advertise,” Kozak said. “They marketed their cars to the other half of the population and they spread the word that women should have the right to vote.”

The 19th Amendment, which gave women the vote, passed the U.S. House in 1918 with a slim, two-thirds vote. Two weeks later the Senate followed suit. When Tennessee became the 36th state to ratify the amendment on Aug. 18, 1920, securing the necessary three quarter majority (Illinois was the first state east of the Mississippi River to do so), it became law.

The need to recruit women into the workforce, producing weapons while their husbands were in the trenches of Europe during World War I, required that they have a way to reach those factory jobs.

“Women’s clubs got involved. Garden clubs, teachers’ clubs; they were very organized and they took the initiative,” she said. “Other times automobile groups contacted those ladies’ clubs and encouraged them to take up the issue. … Illinois was the first state to have a comprehensive infrastructure plan to get the roads graded and paved.”

In addition to being impassable for bicyclists, muddy roads were cumbersome for even sturdiest Model Ts to navigate.

“World War I was a wakeup call for the United States. We might have to be ready to move massive numbers of troops from one end of the country to the other.”

Kozak, of Bolingbrook, now is the longest servicing president of the national Lincoln Highway Association. The former president of the League of Women Voters of DeKalb County, has more than 25 years of college-level teaching experience and has worked in various administrative capacities at Northern Illinois University.

“Is it a coincidence that the freedom to travel offered by the automobile expanded during the time when the Women’s Suffrage movement finally became more successful?” she asked. “The automobile freed women from the constraints of train timetables and the physical labor involved in hitching up a team of horses.”