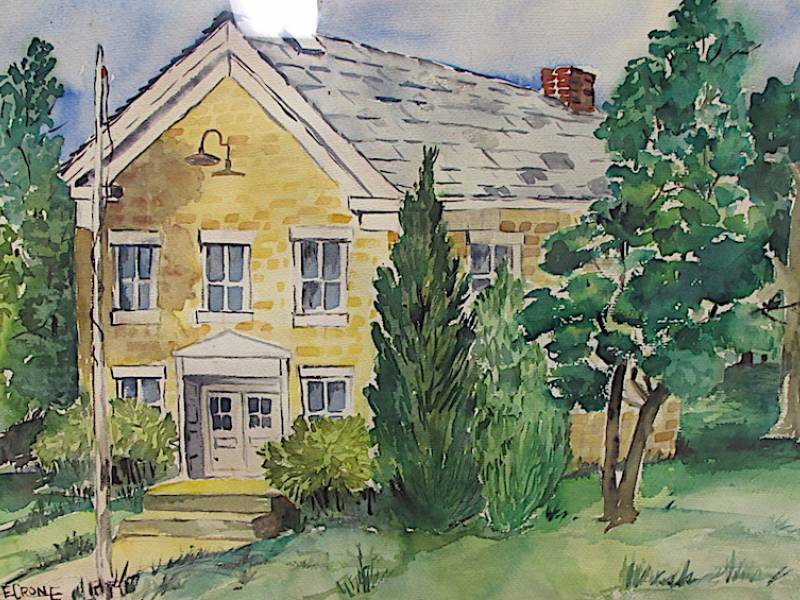 Listen to the WNIJ interview by clicking HERE

•••
As the number of farmers in the Greenwood area swelled, it became apparent that their children needed a place to learn. In 1859, School District 64 completed construction of a 28-40-foot, two-story brick school at 4614 Greenwood Road.

Starting in 1917, high school classes occupied the top floor for a few years with the first eight grades occupying the main level. However, the population continued to dwindle during the Depression and by 1943 enrollment had fallen to 23 students – about a third of the enrollment in 1860. The school operated for 37 years until it consolidated with Woodstock District 200.

Coincidentally, that also is where Ed LeCrone taught for 33 years. His wife, Darlene, also a District 200 teacher, said painting was an “inborn thing” for Ed. And he continued to paint, sometimes with daughter Mimi Book, also of Harvard, up until his death in 2017. Darlene and Ed were married nearly 37 years.

Darlene speculated Bill Schuette, the celebrated former principal of current Greenwood Elementary School, may well have asked Ed to paint this watercolor of its predecessor – located just down the road. It was donated to the McHenry County Historical Society in 2013 by Suanne Habbley of Woodstock.

The Society is launching an initiative to restore this and many of the 150 pieces of artwork in its collection. Whether due to age, damage, or improper display before it arrived, several pieces are in need of restoration. This is necessary before they can be put on display in a new exhibit titled “Art of the Past: Discovering History through McHenry County Artists,” which is slated to open next May.

Those donating to the new Adopt an Artwork program directly support restoration efforts. Some pieces merely need archival materials or framing, while others require more extensive repairs. The art, which ranges from paintings to drawings to etchings, includes a pen-and-ink drawing of house on the corner of Woodstock Street and Walkup Avenue in Crystal Lake and a 1964-era print of the Old Courthouse in Woodstock. For details, click HERE.

In the case of LeCrone’s watercolor, the use of archival-quality matte and backing, removal of suspected mold and an easel for displaying the piece will cost $175. Donors receive an Adopt an Artwork certificate, information packet about your selection, before and after images, formal acknowledgment of your tax-deductible contribution, recognition on the piece’s exhibit label and a personalized invitation to the May 2021 exhibit opening. You also may jointly adopt a piece with family, friends or an organization.

For more information about the Adopt an Artwork program, contact Exhibits Curator Kira Stell at kira@mchenrycountyhistory.org.