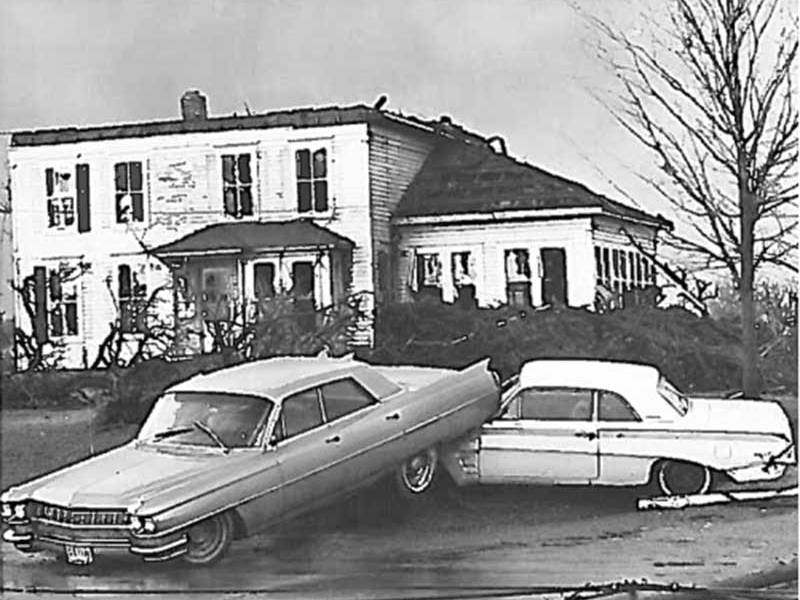 APRIL 2015 Palm Sunday in 1965 looked like a keeper. Fifty years ago, people woke April 11 to clear skies and unseasonably mild temperatures. Children thought about going out and flying kites against the backdrop of pretty, puffy white clouds. Others went for walks or bike rides.

“My brother, Rich, and I were riding our bikes from Lake in the Hills to Crystal Lake that Sunday,” Loretta Odden wrote on the McHenry County Historical Society Facebook page of the morning a tornado touched down in McHenry County. “We were caught in the storm’s wind and hail, and found out that the tornado had hit Crystal Lake, when we decided to turn around and head for home. [I] will never forget the color of that sky!”

What no one knew was that earlier that day a cold front slammed into the warm body of air coming up from the Gulf of Mexico. By late morning, as churches were ending their services, even the unsophisticated radar systems used by weather forecasters in Chicago were picking up the makings of dangerous weather conditions across Missouri and Iowa. By 1 p.m., they were concerned enough to notify Chicago radio stations, who delivered a “severe weather warning” for the northern Illinois and northern Indiana.

Back in 1965, emergency sirens were not purposed to give tornado warnings. They were used for national military civil defense purposes. Today, those and additional sirens are available to give momentary emergency warning to take cover as storms bear down.

Still, in many modern-day tornado situations, some survivors say they either did not hear any sirens or heard them only seconds before the tornado hit. Sadly, in 1965, few were listening to the radio on such a nice early spring day. Their thoughts were on a pleasant evening to come. A “Stormstalker” post noted, “While concerning to some who had heard the news of incoming bad weather, most continued their day without a second thought.” Even the radar operators were unable to notice that multiple tornados were already touching down across Iowa and western Wisconsin in the early afternoon.

“It was a little white cloud. The sun was out and some blue sky. There were streaks from the cloud – white, like sun shining through some rain,” local resident Ben Martin told the Crystal Lake Herald afterward. “Then it’s belly began to swell and elongate. In just a minute, it extended to the earth like a pencil. Then the pencil hit the [Crystal Lake] plaza.”

McHenry County Deputy Sheriff Glen Roberts saw something different: “The sky turned a sickly olive-green color.” And a Woodstock Sentinel report noted that “one minute the day was the most beautiful and sunny of any early spring day. The next, an angry, black, swirling funnel darkened the sky.”

To most other eyewitnesses, the tornado simply “dropped out of the sky.” It was 3:27 p.m. Much later on, it was determined the F-4 tornado, packing winds in excess of 200 mph, first dropped down in the Coventry subdivision before jumping over a crowded restaurant at Route 14 and Virginia Road. It then smashed into a Piggly Wiggly grocery store in the Crystal Lake Plaza. The funnel tore furiously through the Colby subdivision behind the plaza and then lifted momentarily back into the air. It returned to Earth to smash into the Oak Manufacturing plant, among the county’s largest employers at the time.

It killed five and caused massive damage, including demolishing nearly a third of the 300 homes in Coventry and collapsing the roof above Neisner’s dime store at the Plaza. But most importantly, it changed lives forever,

Crystal Lake Historical Society President Diana Kenney said. “I wouldn’t call it scars, but it impacted their lives and their community. It was really incredible,” she said. “I think it really strikes a chord among people who lived through it, and that generates more conversations. Having more conversations brings it [history] back.”

The tornado cut a half-mile swath, starting at the Ivan Hill farm off Barlina Road and heading east toward Island Lake. Pamela Cooper, a former resident now living in New York, was living at 7407 McHenry Ave. at the time. “My sister, brother and I were in the barn jumping on an old mattress when we heard it. My parents, grandmother and baby sister were in the house very worried,” Cooper said. “We three kids – ages 11, 9 and 7 – rode out the storm in the barn basement with its box stalls. It had housed polo ponies in the 1950s.” The barn was untouched, but the storm did uproot trees and completely carry away a huge honeysuckle bush. “When it was over, dad went out and started talking to us,” Cooper said. “We walked about to see how much damage was done. And later – like everyone else – we went for a drive through the Coventry and Colby subdivisions. I remember counting how many trees came down.”

The storm came and left within minutes, leaving survivors standing in momentarily stunned silence among the wreckage of the crushed neighborhoods. Crystal Lake Fire Department Captain Harold Krecker said they were on the scene at the Crystal Lake Plaza “within minutes after the storm hit. Little kids were all over the place, cut and bleeding from the glass that was strewn over the whole area. We didn’t know where to start.”

Within seconds of devastating homes on Harold Street and Keith Avenue, it damaged the Harnischfeger Diesel Plant, Statter Wallpaper Mill and Oak Manufacturing before cutting across east Crystal Lake Avenue and striking the Orchard Acres subdivision near Routes 31 and 176. “We lived in Orchard Acres. Our house was mostly destroyed. We had four cars in our front yard [and] none of them were ours,” said Bill Feffer, now living in Beloit, Wisconsin. “My dad, brothers and I saw the storm from the driving range at [Routes] 31 and 14. We drove home to find the devastation. For a long time, we could not find the rest of the family. We eventually found them in the basement next door. That house was gone down to the deck. We lived in house trailers for all of that summer until the house was repaired.”

Harry Dillon, drafted by the city’s disaster chairman Al Querhammer to be its emergency housing director, said he was completely unaware of the storm until he left a board meeting at St. Mary’s Episcopal Church. “We knew we had a thunderstorm, but we certainly didn’t know it was blowing like that,” Dillon said. “Garbage cans and lawn chairs flew out of the clouds and landed on yards across the street.” Dillon, 86, of Crystal Lake, recalled seeing shocked people “walking around like zombies.” One man was taking a shower when the tornado ripped the roof off his house and left him standing naked in the tub. Another was balancing his checkbook when the storm struck. “A couple days later, he was getting calls from Waukegan,” Dillon said. “People had picked up his checks over there.” Dillon, who was tasked with finding temporary housing for the displaced, soon realized finding a suitable site for a temporary trailer park paled alongside the challenge of providing sewer and water.

So when the Illinois Mobile Home Dealers Association stepped forward and delivered 95 trailers, they were taken to the individual lots. “We ran service through the basement windows and connected into the existing sewer lines and city water,” Dillon said. “The foundations were in good shape. They just needed to have the frames up.”

Some of the 118 families whose homes were severely damaged or destroyed ran a hose from a neighbor. Nearly all stayed with neighbors, relatives or friends. “The thing I remember most was the community coming together,” Dillon said. “We set up an emergency shelter in the [high school] fieldhouse, and you know how many people used it? Zero. The community was there for them. Golf buddies, lodge buddies and friends came and grabbed people and took them home.”

Richard Holter, an automobile salesman for Ormsby Motors was killed along with his wife, Rosalie, and son, John. Also killed were Louis Knaack, an assistant treasurer at the Oak Manufacturing Co., and Rae Goss, a vice president of the Inland Lithographing Co. Kenney credited Goss with saving numerous lives, herding teenagers who had been playing basketball in his remodeled barn into his basement just before the tornado struck near what is now Country Donuts. While returning to the barn to double check for stragglers, the top half of the structure toppled onto him. He was the tornado’s first victim.

Nowadays there more warning systems available. Bob Ellsworth, director of the McHenry County Emergency Services & Disaster Agency, said National Oceanic and Atmospheric Administration-sanctioned weather radios make a piercing sound and voice warning when weather conditions are suitable for a tornado. Cell phones also can be adapted to give emergency weather warnings through the use of an app, which connects them to the same wavelength as NOAA weather radios. Also today, much more powerful and analytical radars, such as Doppler, are in use by the weather service to detect conditions for tornadic formations. These devices allow forecasters to increase the lead time for warnings, but they are not a panacea. “Even today, with all of our sophisticated equipment, could it happen again? Abolutely,” Kenney said. “It’s just Mother Nature.”