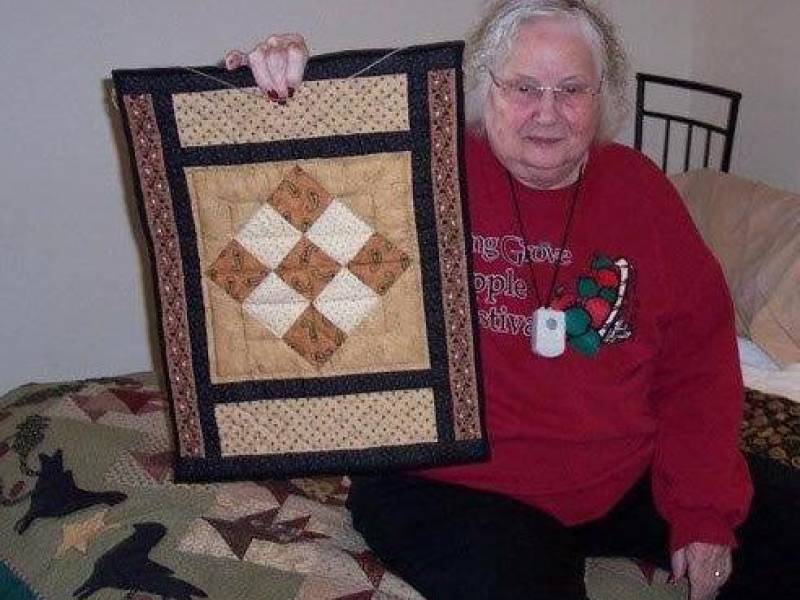 Sue Neuman of McHenry never thought she had no more chance of winning the Heritage Quilters’ raffle quilt this year, than finding a needle in a sewing box.

She was - quite happily – wrong.

“I buy a lot of quilts,” Neuman said. “I had to build a ladder in my bedroom to display all of them.”

Born and raised in Rogers Park, she and her husband moved to Wheeling and lived there until his passing. About 15 years ago she moved to McHenry in order to be closer to her daughter.

“When I got the news I called everyone,” Neuman said with a smile. “I’ve never won anything.”

The quilt, Honoring Adelia, was dedicated to Ann Bornman of Crystal Lake. A dedication block in the back corner states:

A loving wife, mother and grandmother, Ann is an extremely talented quilters and a generous soul. She has made over 100 quilts. They decorate her home. Many have been given to family and friends.

Ann donated her vast fabric collection to others, via the Historical Society. Twenty-seven civic and church groups received hundreds of yards of fabric for their missions.

We have been fortunate to have benefited from her amazing gift.

In the research library of the McHenry County Historical Museum is a diary written during the year 1861 by an 18 year old girl - McHenry County resident Adelia Thomas. She reference piecing and quilting with other friends and neighbors – even sewing on a machine for others. Her family must have been among the few that could afford a machine at that time.

Adelia mentions many male acquaintances who signed up and marched off to serve in the Civil War. It is not hard to imagine that she would have quilted and tied comforts to send to soldiers.

It has been estimated 250,000 were produced and donated to the U.S. Sanitary Commission during the war.

This year we are looking at a timeframe 150 years ago – the 1870s. This puts us five years after the end of the Civil War. Shortages have eased, prices,(which rose tenfold) have dropped, and women can now begin to quilt for family.

There would have been a dearth of quilts, since the majority of those sent away did not survive to return home with veterans.

Our newest Heritage quilt, "Honoring Adelia," is made from two blocks – an old, favorite 9-patch used widely in the 1800s – and a horizontal rectangle using a constant print. Strips of these blocks are set apart by a sashing of black, and a print fussy-cut to produce period visual interest.

A variety of colors are used for the 9-patch and all were available and popular during our time period around 1870. 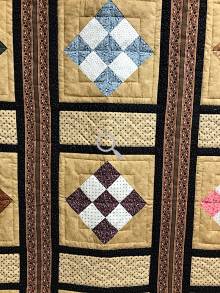