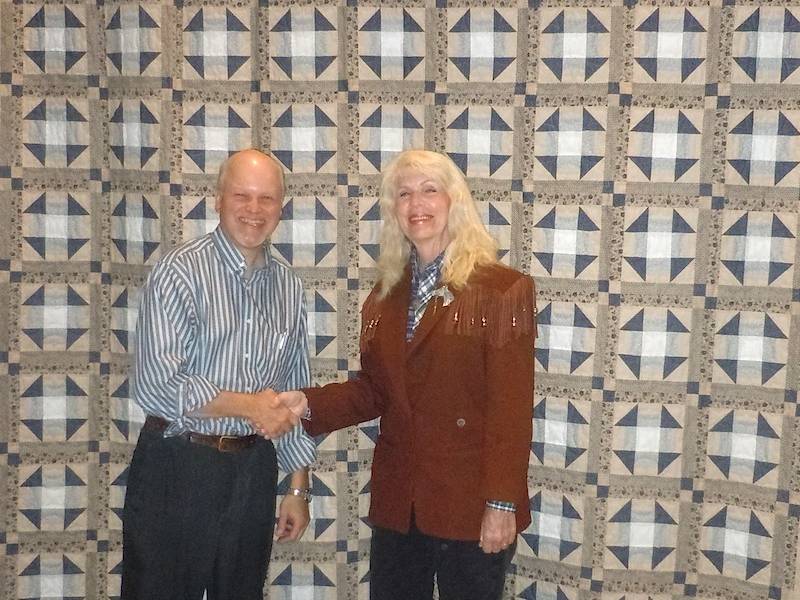 Heritage Quilters leader Jan Knight, presented a brief history lesson during the Nov. 11 quilt program on indigo dye and its importance in colonial America. Eliza Lucas Pinckney – born in 1722 in Antiqua, West Indies, and educated in England – studied botany as a child. When she was still quite young, her family moved to to a plantation in Charleston, S.C.

By age 16, Eliza ran three plantations by herself – after her father, a British military officer, was sent to the Caribbean – and began to cultivate an interest in textiles. In the 1740s Eliza received indigo seeds from her father, a governor in Antigua.  She researched and experimented for many years till she found a process for cultivating and producing indigo, eventually perfecting a method of making blocks of indigo cakes to be turned into dye. The dye, for which England had relied upon from French sources, was in great demand since it was used in military uniforms and in dress coats of the day. However, it took 100  pounds of plant material to make just 4 ounces of dye.

In 1739 she began growing and experimenting with strains of the indigo plant from which a blue dye can be obtained. In 1745-1746, only about 5,000 pounds of indigo were exported from the Charleston area. But with Eliza Pinckney's successes, that volume grew to 130,000 pounds within two years. Indigo became second only to rice as cash crop at the time. Lewis Booker Wright, author of "South Carolina, A Bicentennial History," wrote: "So rapid was the development of the industry that by 1748, South Carolina shipped England 134,118 pounds of indigo cakes, and it remained a profitable crop until the Revolution.”

British raids destroyed her property during the American War of Independence leaving her ruined financially. Eliza Pinckney died in 1793. She was held in such high esteem, that President George Washington served as one of the pallbearers at her funeral. She is buried in Philadelphia.

Kvidera is a long-time supporter of the Society and a faithful raffle quilt buyer. Work already is underway on the 2016 raffle quilt, "A Pieceful Garden." The Heritage Quilters meet each Wednesday morning at the musuem. Quilters of all skill levels are invited to join them. A special thank you to the McHenry County Recorder's office for their assistance in selling and promoting our quilt fundraiser and thanks to all those who bought tickets!